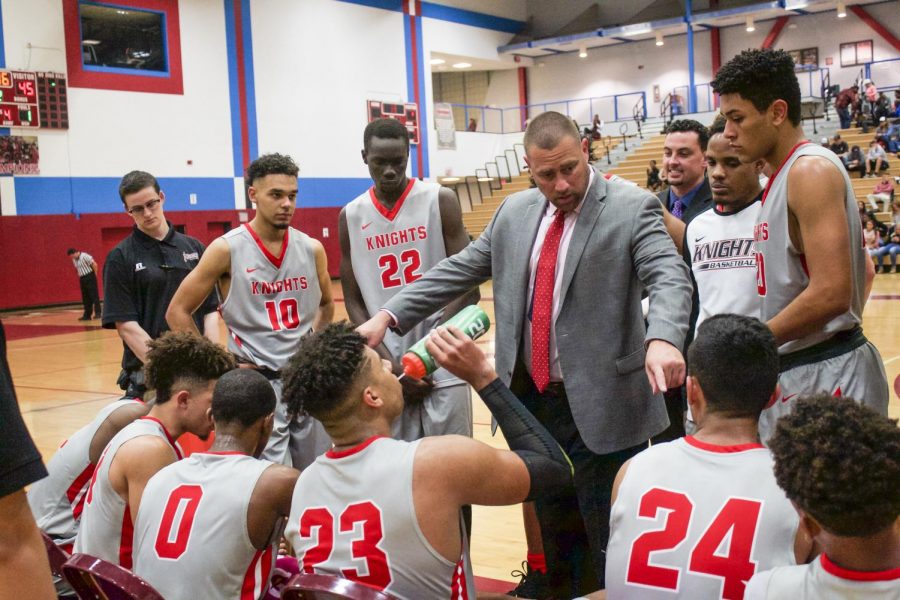 Coach Mitch Charlens talks to the team during a time-out to go over his final thoughts to take home another win.

The victory over Imperial Valley gave the Knight’s men’s basketball team their 21st consecutive win and set them one game away from completing the PCAC South division undefeated for the third consecutive season. The Knights hold a 9-0 record in conference play and 28-2 overall record.

With the blow of the whistle, both teams jumped for the ball. For the first four minutes, it was an even match between the Knights and the Imperial Valley Arabs. With Imperial Valley ahead 3-2, the Knights’ Freshman point guard Joseph Riley made a three point shot, giving them the 5-3 lead.

Sophomore point guard Wonder Smith passed to McCoy, who then passed to Esposito. Esposito went for a two point layup, cut right and took the ball in for a dunk. The score was 23-17 Knights with 9:29 minutes left on the clock.

Imperial Valley did not give up without a fight. With four minutes left in the half, the Arabscut the Knights’ lead by 10 points.

By the end of the first half the score was 52-35 City College.

Mendez set up for a three-pointer, took the shot but missed. Sophomore forward Jourdain Richard took the ball to the three point line in a quick recovery. He set up and made the shot, leaving the score at 55-41 Knights.

City College’s point guard Isaac Davis said, “I think we started off slow and then second half we realized how we have to start preparing for playoffs and play every game like it’s a championship game. So when we play high caliber teams, we play the right way.”

When asked how the team would be preparing for playoffs, he responded, “It starts with our coaching staff, they push us to the limit and practice every day mainly on defense. Defense leads to a good offense.”

Imperial Valley declined to share their thoughts on the game.