City College celebrates a milestone win for its coach and a win that could sneak the Knights into the playoffs. 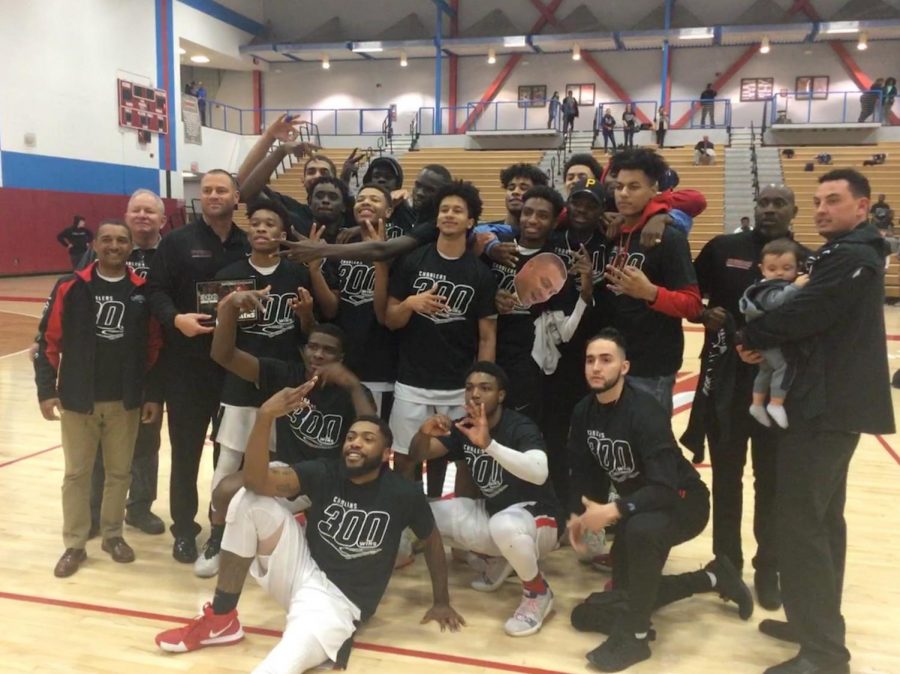 With the win, coach Mitch Charlens achieved his 300th victory with the program.

Harry West Gym erupted into cheers as time expired. Players and fans were given commemorative t-shirts and the team mobbed the coach, dosing him with water.

Sophomore guard Joseph Riley said it was important for the team to get the win when they did.

“It was a pride thing,” Riley said. “Being here for two years, knowing Coach Mitch and what he does for the program — you really want to see somebody like that excel and get a milestone.”

It was Charlens’ third attempt at securing win No. 300 after the Knights dropped their previous two games for their first consecutive losses since 2013.

The Knights took the lead early and never gave it up in the aggressive affair, which saw starters from both teams receiving multiple foul calls and the Arabs being charged with a technical.

Usual workhorse Robby Robinson got into foul trouble early in the game and was sent to the bench by Charlens to save him for the second half.

The move paid off as Robinson finished with 22 points, three steals and eight assists. Riley tied Robinson with his 22 points before fouling out.

Imperial Valley’s foul issues forced them to play with only four men on the floor in the game’s final 1:30.

“All four times I’ve played IVC, the game was very physical,” said Riley, who admitted that the team was prepared for that style of play. “There’s been a lot of talk, but I’ve been playing basketball for most of my life. So it’s one of those things where you know how to deal with it after awhile.”

Added Charlens: “It’s conference. These teams, they want to win and they aren’t gonna back down.”

In the aftermath of his 300th win, Charlens reflected on what brought him to this point.

“It just makes me think about all the teams and the guys that accumulated those wins,” he said.

With 15 season of Charlens at the helm and 300 wins, the Knights have been a model of consistency, averaging 20 wins a year.

“It’s crazy to think about,” he said. “I’m fortunate, and the fact that these kids were so excited for me, it made me feel great.”

Charlens is proud of this year’s group, which was full of new faces after the 2017-18 team made a state championship game appearance.

Charlens is confident that the team has done enough to earn another playoff run.

“Our criteria is pretty good,” Charlens said. “We played a top-ten, toughest schedule in the state.

If selected to participate in the postseason, it would be Riley’s second and final playoff appearance with the Knights.

He plans to stay close to home as he continues his career after City College. He has received offers from Concordia Irvine and Azusa Pacific but has not made a decision on which school he will attend next. But for Riley, one thing is certain.

“I’ll be playing ball wherever I go,” he said.

Charlens is no stranger to talented players moving on and has a message for all current and former players, especially those who played for him in his early years.

“Thank you to all those guys that trusted me with their college careers,” he said.