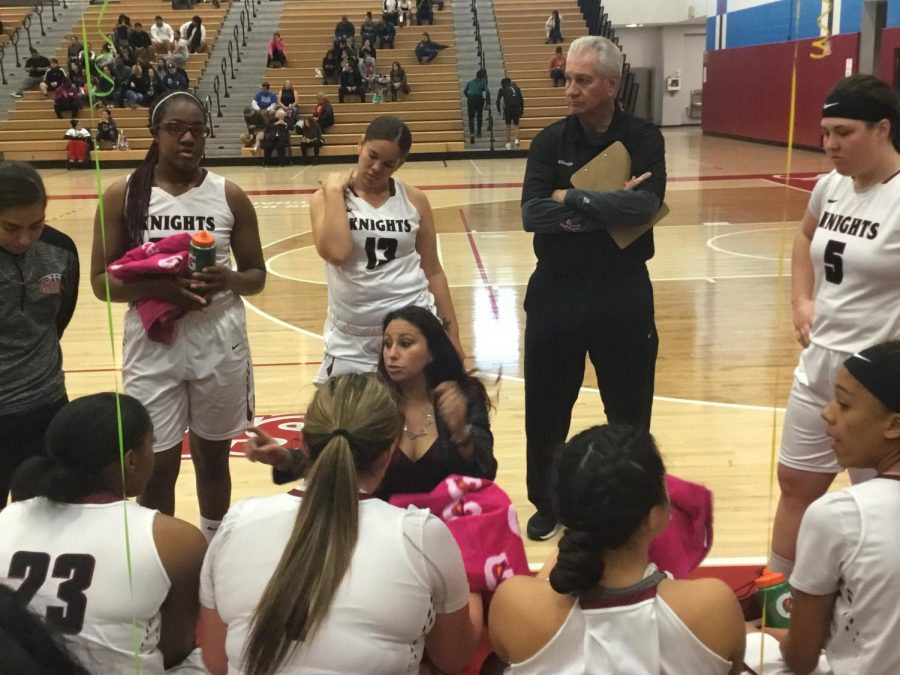 Coach Andrea Aguilar-Montalban speaks to players during final game of the season. By Sonny Garibay/City Times

Momentum shifted regularly in a game that saw a total of 44 steals and 66 defensive rebounds. Sophomore forward Elliot Nixon led the Knights in scoring with 23 points. Destiny Salgado led Imperial with 21 points.

The Knights (12-15) will miss the playoffs for the first time under two-time Pacific Coast Athletic Conference  Coach of the Year Andrea Aguilar-Montalban. But she doesn’t expect the team to be out of contention for long because of a strong recruiting class and five returning players.

“All of the freshmen have really big potential,” said Montalban, who called the returners “big-time players.”

An injury to guard Breanna Gafare, and the learning curve of the developing players, held the Knights back from living up to the standard that Montalban had set for the program.

The new season will bring its own challenges, one of them being building a winner without key starters such as Nixon.

Nixon, a Coronado High School product, will remember her time at City College fondly while she looks to continue playing at the next level.

“My coaches have done an incredible job of helping me become a better player,” Nixon said. “I’ve learned so much here. You can’t really dissect where you learn something or from who, but I know that I’ve learned something really special from here.

“I can’t wait to come back and see coach every year.”

Among Nixon’s happiest moments include going 8-0 in conference last season, leading to a PCAC title, and beating LA Harbor earlier in the season, which she marked as a turning point for the team this year after a slow start.

Potential landing spots for Nixon include Humboldt State University and Sonoma State University in Northern California, as well as a few universities on the East Coast. She remains in contact with coaches and is waiting for the right fit, and for a coaching staff to bet on her the way her coaches at City College have.

“Coach Dre has done more than enough for this team and(assistant coach Bob Aguilar) has taught me so much. I can’t thank them enough,” she said.