OPINION | Nothing to be ashamed of for City College Knights basketball

Despite a frustrating elimination, Knights basketball concluded a successful season. 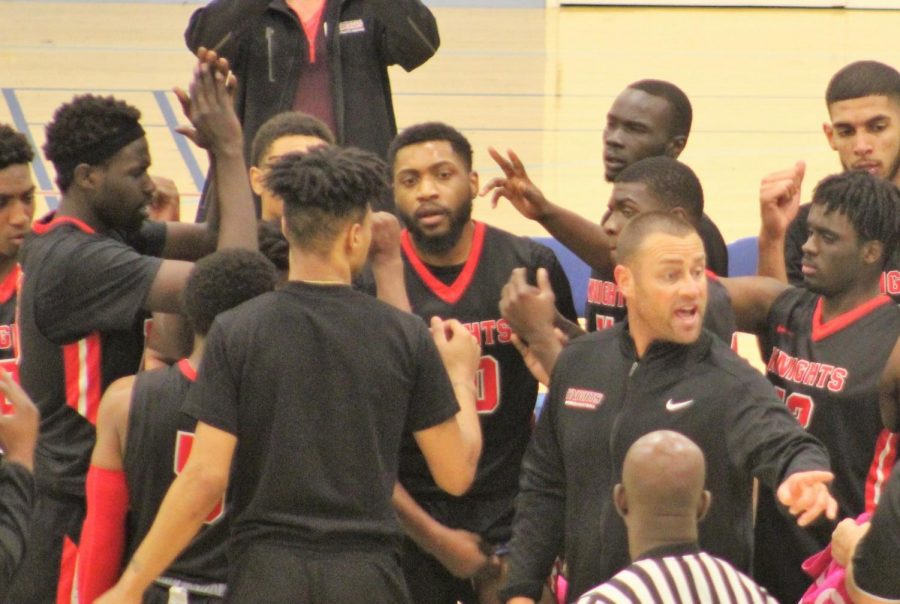 Every competitive event will produce winners and losers, and every losing side will inevitably go through the “would’ve” and “could’ve” mental analysis.

The San Diego City College men’s basketball team will have plenty of “would’ve” and “could’ve” situations to think about. Among them, the team could have played a second-round playoff game against East Los Angeles tonight.

Had any play throughout Wednesday’s 75-74 loss against Santa Monica College lasted a tenth of a second longer, City College could’ve have held on to its lead.

It may be hard to see for some of the City College players following the late-game dramatics, but there should be no shame felt for the Knights’ 2018-19 season.

Winning the state championship two years ago and finishing as runner’s up last year might have produced higher  expectations than a first-round playoff loss. But there is much more behind the scenes that needs to be taken into consideration when evaluating the Knights’ season.

“It’s been a crazy year,” said Knights head coach Mitch Charlens outside of the team’s locker room in Santa Monica on Wednesday night. “Our whole year has been this way. … This year has been one of those weird years where so many of our games went the other way.”

When judging the City College’s basketball season, it is important to remember the team was  built from the ground up during the offseason.

The community college system only allows players to play a maximum of two years, unlike the NCAA where players can play for universities for up to four years. None of the state championship players are on the Knights’ roster anymore.

After 15 years with the Knights, coach Mitch Charlens knows all about having to build new teams every few years after veteran players cycle out.

“We have a brand new team this year,” Charlens said. “It’s been a great experience for these guys.”

A point of pride the Knights can take away from this year is the individual performances that led to multiple players being recognized by the Pacific Coast Athletic Conference.

“Kai (Huntsberry) was only honorable mention — not that that is a knock — because he missed five or so (games) with what we thought was a broken ankle,” Charlens said.

Huntsberry was not the one to suffer a significant injury for the Knights.

Carter was sidelined for six weeks with a broken hand.

“As a freshman, it takes a lot to get your rhythm when you’re out for so much,” Charlens said.

The Knights players will one day be able to look back at this 2018-19 season and smile despite the 1-point, final tenth-of-a-second loss.

This year’s players will be able to look back on this season and proudly say, “this is the season we got win No. 300 for coach.”

“It was a pride thing,” said Riley to the City Times after a 112-84 win over Imperial Valley College in the last game of the regular season, which ended up being Charlens’ 300th victory.

“Being here for two years, knowing coach Mitch and what he does for the program — you really want to see somebody like that excel and get a milestone.”

The quest for victory number 301 will start in the Fall 2019 semester for Charlens and the Knights.