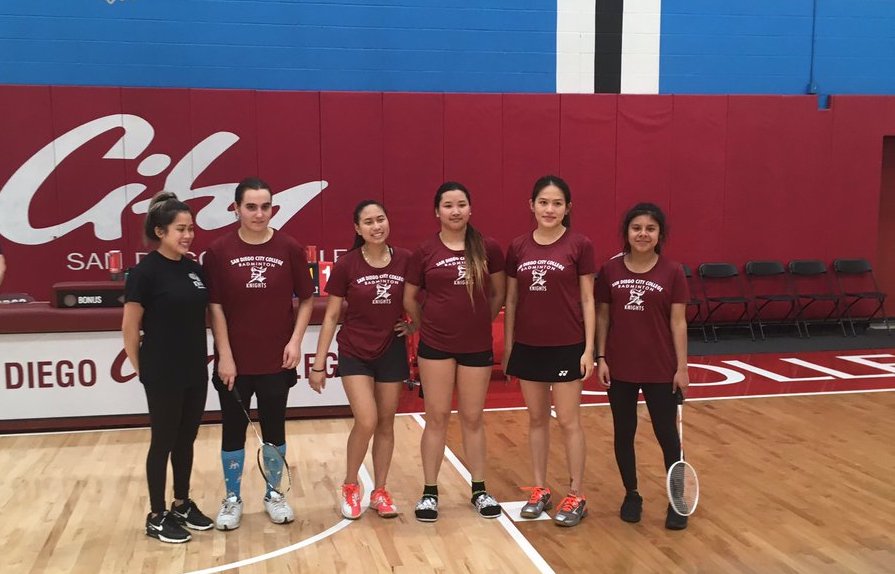 The San Diego City College badminton team capped of its season with a 14-7 win over Irvine Valley College to earn a Pacific Coast Athletic Conference championship on Friday.

“(There) were alot of ups and downs,” said Knights coach Darby Duprat when reflecting on the season.

The coach is proud of what the team has been able to accomplish this year.

“They did really well inspiring one another. Even though we have players that don’t have that much experience. Seeing someone who has a lot of experience prior they’re just like, ‘Wow that really motivates me to do better.’”

The Knights put off celebrating immediately after the game and waited for the conference to decide whether to replay a match earlier in the season between IVC and Grossmont College.

A win by IVC in such a game would have given the Lasers the conference championship.

The rematch will not happen and the Knights’ (6-2-1) win against the Lasers (6-3) retroactively became the conference championship game. City College took the season series again Irvine Valley with both teams having a win a piece going into the contest.

“They never give up,”  Knights’ Sum Yin Ngai added after the match. “Numbers, three, four, five, (in the lineup) I know two of them are new but they try their best, and they (come) to practice all the time.”

Yin Ngai finished the regular season undefeated after winning her matches and attributes her success this season to her “take it easy” mentality.

“I try not to get nervous. If I get nervous I’ll get mad and then I won’t do good.”

The playoff picture is a complicated one for the Knights.  First will be a matchup against undefeated Pasadena City College May 1st on the road. The Lancers (8-0) have won back to back state titles.

Yin Ngai believes that an upset is in order. “I think we can make it. I think we will win.”
Men’s tennis
The Knights men’s tennis season came to an end on Tuesday after they were shutout by Cerritos College, 5-0, in the second round of the playoffs.

City College ended the season in second place in the PCAC and earned a first round home match, the first San Diego School to do so since 2015.

Coach Brandon Lupian ended the season with his first playoff victory, after falling short on the road in the two prior seasons.
Softball
City College softball extended its win streak to four games on Monday defeating Saddleback College 9-3.

The Knights then lost three consecutive games. A 9-2 loss against Southwestern College on Friday was followed by two losses against Moorpark College 9-7 and 3-2 in a double header on Saturday.
Baseball
The Knights were swept by San Diego Mesa College in three games last week.

City College lost both of its matches at home. A 3-2 loss against Mesa was followed by a 5-0 loss to Grossmont.

This recording was created as a collaboration with between the City Times and its staff and professor Jodina Scazzola and the students in the Acting for Radio/Voice-Over (RTVF 106) course.