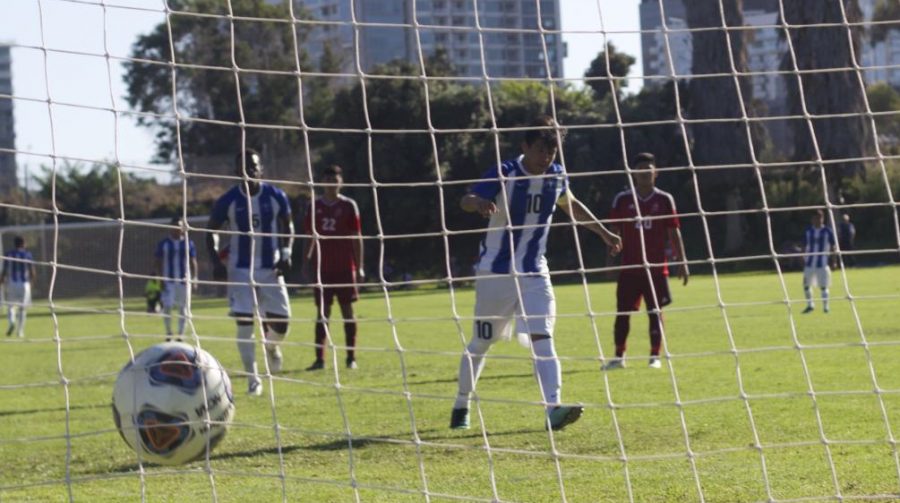 The San Diego City College men’s soccer team was anything but pessimistic after its 4-1 loss to Cerritos College on Tuesday.

In fact, to head coach Milton Hidalgo, it didn’t feel like a 4-1 loss at all.

“I’m not at all bummed out because I know it’s gonna click,” he said. “We’re playing top competition. They show you where your weaknesses are at.”

The Falcons are coming off a state title and are undefeated so far this season.

“I don’t think we’ll face a tougher team than them,” he added.

Hidalgo did not see a gap in talent between the two teams during the match. He saw a gap in execution and experience.

“We have a young group,” Hidalgo said. “(There were) little mental lapses, crucial mistakes at crucial times, especially on our defensive end. We got to stay away from that. … At this level, that’s the difference.”

The Knights drew four yellow cards during the contest. One led to the game’s first score after City goalkeeper Sebastian Gillian made contact with an attacker while breaking up a scoring try.

The Knights later nearly tied the match at 1-1, but a would-be goal sailed just high of the crossbar in the game’s 39th minute.

City was within a score after Jordy Robolledo’s second half goal, but a fatigued Knights team allowed two additional Falcons goals in the match’s final 15 minutes.

Acting captain Federico Olvera, who served in place of injured defensive back Dalton Kinney, said the team will begin seeing better results on the pitch in the coming weeks as the group continues to take the field together more.

“We’ve been improving since the first game. The first game was terrible,” he said, referencing City’s season opening loss to Rio Hondo, which also ended with a score of 4-1. “We fought till the end and 70% of the game we were on top of them,” Olvera said. “We were fighting. I think the score is unfair on us … but we never stopped working, we never stopped hustling. We’re a new team. We’ll be good.”

There are 15 freshmen on the team, according to Olvera.

Despite the result, Hidalgo walked away from the match proud of his players.

“Our effort was premier,” he said.