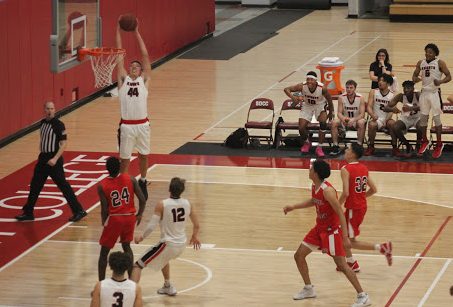 With four games left in the regular season, the Knights  (19-5, 10-2 in the Pacific Coast Athletic Conference) sit solidly in second place in the league.

“Even though we let Southwestern get us both times, we still want to compete to get a top spot,” said Legend Stamps, who plays center for City College. “(We want to) compete at the highest level we possibly can.”

Against IVC, sophomore guard Victor Irhirhi scored 24 points with six rebounds and two assists. He was near-perfect from the floor, making 8-of-9 shots and going 3-of-3 from behind the three-point line. Sophomore NaShom Carter scored 12 points, while Stamps added 13 points with eight rebounds.

Off to a rough start, the Knights had a hard time dealing with IVC’s zone defense. But City College adjusted and quickly turned the game around with a 19-2 run on its way to a 45-32 lead at halftime.

After the break, the Knights turned up the pressure on defense.

“We just got to play in our intensity and not play on the same intensity as the other team,” said point guard Carter. “I’m just hoping we play (Southwestern) in the playoffs to get our revenge.”

The Knights will visit Miramar College (3-8) on Wednesday at 7 p.m. City’s next home game will be against Palomar College on Feb. 14 at 7 p.m.