With just two games left in the season, the Knights are hopeful to make to playoffs 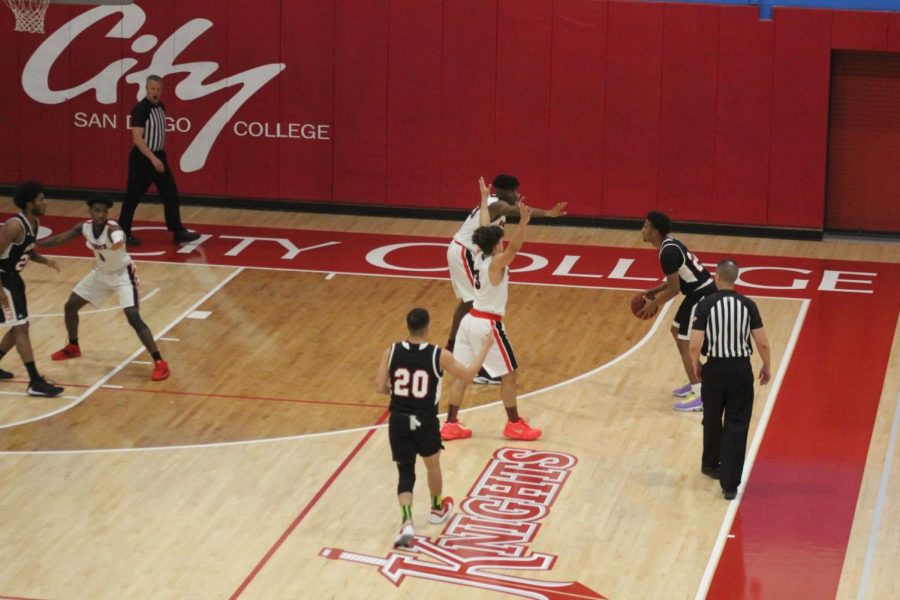 With a pair of games separating the San Diego City College men’s basketball team from the postseason, the Knights won against Palomar College, 88-81, on Friday, Feb. 14 with an attendance of about 100 people cheered for both teams.

The Knights (21-5) are ranked No. 18 in the final California Community College Athletic Association rankings of the regular season.

“It’s a good win heading into the playoffs,” said Dominic Hovasse, who plays guard for the Knights. “(It) gives us momentum. They’re a good team and it’s good to get those big wins late in the season to get us rolling.”

The Knights struggled early on to take a lead over the Comets, finishing the first half ahead 42-41.

“We gotta start the first half a little better,” Hovasse said. “We’ve been struggling the whole season.”

Added teammate Victor Irhirhi: “The first half, we all start off slow, but (that’s) something we have to work on as a team. Everybody started off slow.”

Nearly all of that for Irhirhi came late in the game, as the guard scored 15 points with 3 rebounds and 1 assist in the second half.

“The first half I was kinda forcing it, getting under my own game,” Irhirhi said. “Second half, I came in and cooled my own head and gave some big shots.”

The Knights players said they’re excited to see if they get to move on to the first round of the playoffs or advance with a bye to the Elite Eight, which City has done in the past.

“Coaches do a good job to keep us locked in,” Havasse said. “(We) come in every practice, every game … (We) just try to get better everyday. If we come in with that mentality… I think we will go far.”

City will be visiting MiraCosta on Wednesday, Feb. 19 and will wrap up the season at home against Grossmont College on Friday, Feb. 21 at 7 p.m.

Sonny Garibay and Jovani Juarez contributed to this report.