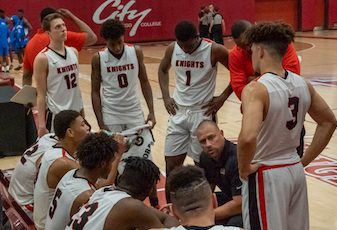 The Knights gather during a timeout in the first round of the Southern California Regional playoffs. Photo by Aarmon Mehdiyan/City Times

The San Diego City College men’s basketball team was defeated by Los Angeles Valley, 83-81, in overtime during the third round of the Southern California Regional playoffs on Saturday night.

With 24 seconds left in overtime, guard Johnnie Coleman had the opportunity to win the game for the Monarchs. He sprinted the full length of the court and did just that as he made the game-winning layup with no time left on the clock.

In the end, the game really came down to free throws. The Knights (25-6) missed crucial free throws down the stretch that could have changed the outcome.

City shot 60% from the free-throw line, compared to the Monarchs 81%.

Freshman guard Dominic Hovasse led the way for the Knights with 19 points, 5 rebounds, 5-of-7 made from three-point range. Teammate Isaac Davis added 17 points and 7 assists.

No. 3-seeded Los Angeles Valley was led by Greg Chew Jr. with 22 points and 13 rebounds, along with Kody Knox, who added 16 points and 7 rebounds.