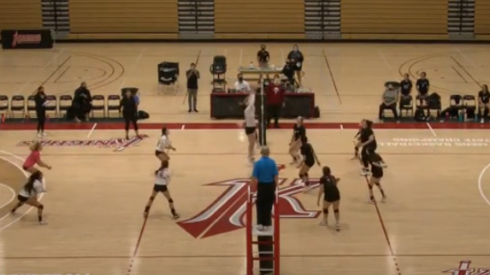 Music blared and the lights of digital banners reflected off the polished wooden floors of Harry West Gymnasium as the City College women’s volleyball team celebrated snapping a five-match losing streak on Oct. 20.

The Knights stayed focused and energetic throughout the marathon match against Pacific Coast Athletic Conference rivals Imperial Valley College (7-9), winning in the deciding fifth set and ending with a 23-25, 25-15, 17-25, 25-17, 15-13 victory.

IVC took the first set in a close battle 25-23, however, the Knights stayed resilient with long points and returned the favor with consistent pressure breaking through with a heavy offense into the second set.

Middle blocker Elizabeth Hunsaker (Coronado) led the team with 22 kills and two service aces, one of three players with 10 or more kills.

“All the girls have built confidence and to go out and play hard the rest of the season,” said co-captain freshman Ashley Davies (Burney, CA).

“With six games left in the season, there is an opportunity to build momentum with this win”, Davies said.