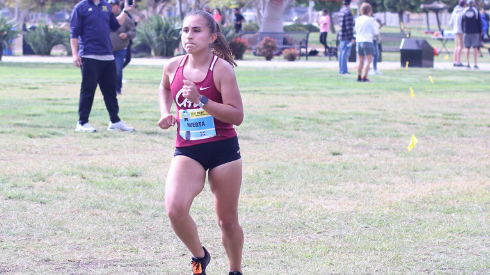 City’s Yesenia Huerta runs at the PCAC championship on Oct. 22. Photo by Will Mauriz/City Times Media

The Knights made history, finishing in second place in the PCAC. It is their highest finish in the conference since 1989.

City had been competitive with two first place finishes, one third and a sixth place in the last four meets, so the Knights were expected to place high in the rankings.

“As a team, I am very confident that we will make at least second place in our conference meet,” freshman psychology major Sofya Chernyak (East Village Middle College) said in an interview before the meet. “We will make it to the regional meet, however, we are concerned about qualifying for the state meet as only the top four teams make it to that.”

Sophomore co-captain Yesenia Huerta (Southwest) led the way with a 21:18.9 to finish in fifth place overall.

“I kept reminding myself to keep my eyes up and not to look down,” Huerta said.  “We all did great no matter what place we got or time we got.”

“My team is supportive and all push each other,” she said, appreciative of the team chemistry.

The Knights will next move on to the Southern California regional championship, which will be held at Mile Square Park in Fountain Valley on Nov. 5 at 11 a.m.