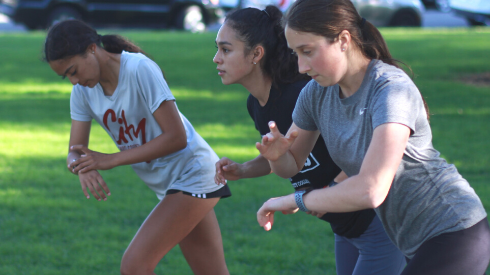 The Knights women’s cross country team held its last practice on Oct. 16, preparing for something it has never been part of before — a state championship run.

For seven years, coach Marco Anzures has been working with the Knights cross country team.

“Every year we have been getting better and better,” Anzures said.

Anzures explained that in previous years, runners had been able to qualify for individual bids at the state level, but never as a team.

He also explained the big difference this year was the offseason.

The program has recruited and maintained a roster of experienced runners who learned to run during their freshmen year and became better into their sophomore year, over time becoming experienced high school runners hungry to push into collegiate-level competition.

“The culture is different,” Anzures said. “Everyone shows up on time to practice, which shows … that this was going to be a good team.”

Each season has been built upon the previous, emphasizing a unifying culture.

Freshman runner Sofya Chernyak may be new to the team, but she has run the course set for the state championship three times previously and provided insight to the challenge ahead — Woodward Park.

As opposed to the regional championship, the team that runs Nov. 20 will be in the biggest pool of top state competition. They will be going against many teams they faced in Southern California and Northern California.

“I think our team spirit is higher as freshmen,” Chernyak said. “People have told me that in the past we did not have as much of a personal bond and didn’t show up as consistently to practice, but now everyone shows up as much as they can.”

Compared to the regional tournament , which was flatter, this course features more hills.

Sophomore Rachel Karalnik (Brooklyn, NY), a film and television major, has only been running since December 2020 with no previous running background.

Despite her lack of experience, she has improved her times, finishing in the top ten in the Knights’ first meet of the season.

The development of new members like Karalnik speaks to the culture of the team and promotes a dynamic group openness to push and support one another.

“I look forward to racing at state, and I feel it is a once-in-a-lifetime opportunity and it feels incredible to be part of that,” Karalnik said.
Knights soccer advance for first time
The City College women’s soccer team qualified for its first postseason playoff game in the school’s history.

The Knights finished their last practice on Oct.17 before heading out to potentially make more history.

The Knights (11-4-3) moved into the 18th seed in the 19-team in the California Community College Athletic Association (CCCAA) championship playoff after 5-0 victory against Imperial Valley College (3-16).

“I attribute our success to ourselves,” forward Tessa Fernandez (Rancho Bernardo) said. “We worked so hard, the amount of interference this season was ridiculous and the coaches kept us pushing … and we trained out here no matter what.”

In the Pacific Coast Athletic Conference, City finished in third place behind Southwestern (12-6-1) and its biggest rival Mesa College (14-2-2).

The Knights have some experience with the Long Beach City Vikings, having played them in scrimmage back on Aug. 20.

Standouts like attacking center-mid Sydney Sanchez (Torrey Pines), one of the City’s leading scorers with seven goals this season, participated in the scrimmage against Long Beach City.

“It was tough to qualify,” Sanchez said. “We knew we had a long season in front of us, with COVID-19-related issues and girls out.”

The Knights did have all their starting players in the first scrimmage against Long Beach City College and both teams now have had opportunities to enhance their chemistry.

“I have been playing soccer since my jersey was too big,” center-mid Anais Thompson (Poway) said. ”The road was not easy. We have had difficulties in getting wins in games counted in for higher ranking. Tying Mesa meant a lot in terms of ranking points and Cuyamaca losing helped overall.”

The Knights will take on the Vikings on Nov. 18 at 5 p.m. To see the overall bracket, click here.