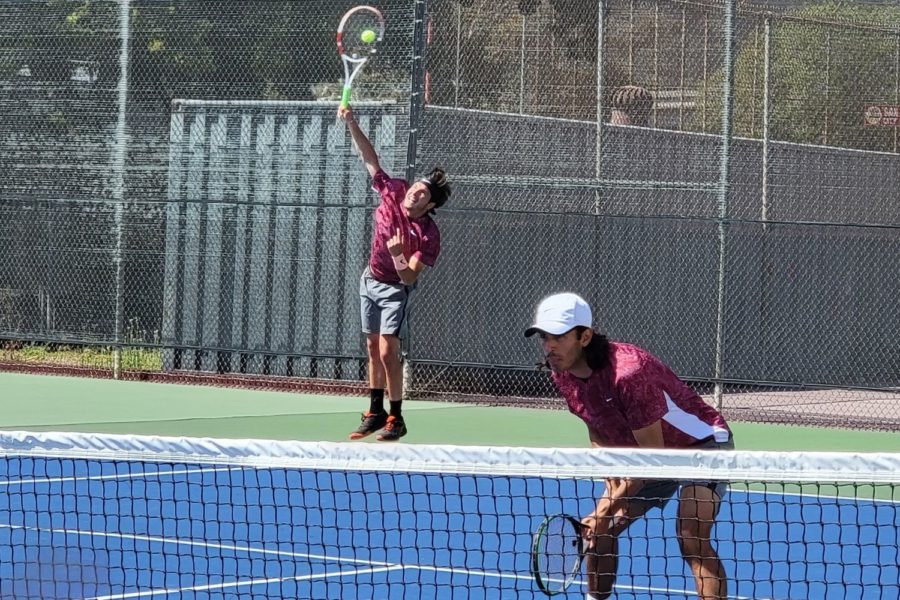 Eduardo Castillo (left) serving up against Riverside in their doubles match in the regional first round with his partner Carlos Robles (right) at home. Photo by Antonio Contreras/City times media

The San Diego City College men’s tennis team are set to play at No. 2 seed Ventura College (17-0) in the regional semifinal on April 12 at 2 p.m.

This is the second straight postseason that City has also made it past the first-round regionals.

“We are very happy we pulled through,” freshman Nik Speshilov said. “The doubles were a little easier than the singles, but we all played well in the end and were happy with our performance and excited for (the second round).”

“Ventura has a pretty solid team overall,”Speshilov said. “We have been playing well recently and we can use that to our advantage to be ready for them.”

The Knights, who have made the playoffs in four consecutive seasons, posted a .813 win percentage under coach Brandon Lupian. It is City’s highest since Lupian took over as head coach in 2007.

The last time City made it to the regional semifinal was in 2019. That was also the last time the team played a full season due to the COVID-19 pandemic. Before all college sports were put on hold, the team posted a 7-2 record overall and 4-0 in conference play.

Lupian said his team is looking forward to its next match against Ventura. He expects a very competitive match and hopes his team comes out on top.

“(Ventura is) undefeated for a reason,” Lupian said. “I expect two highly competitive teams to give it their best and hopefully our team comes out victorious.”