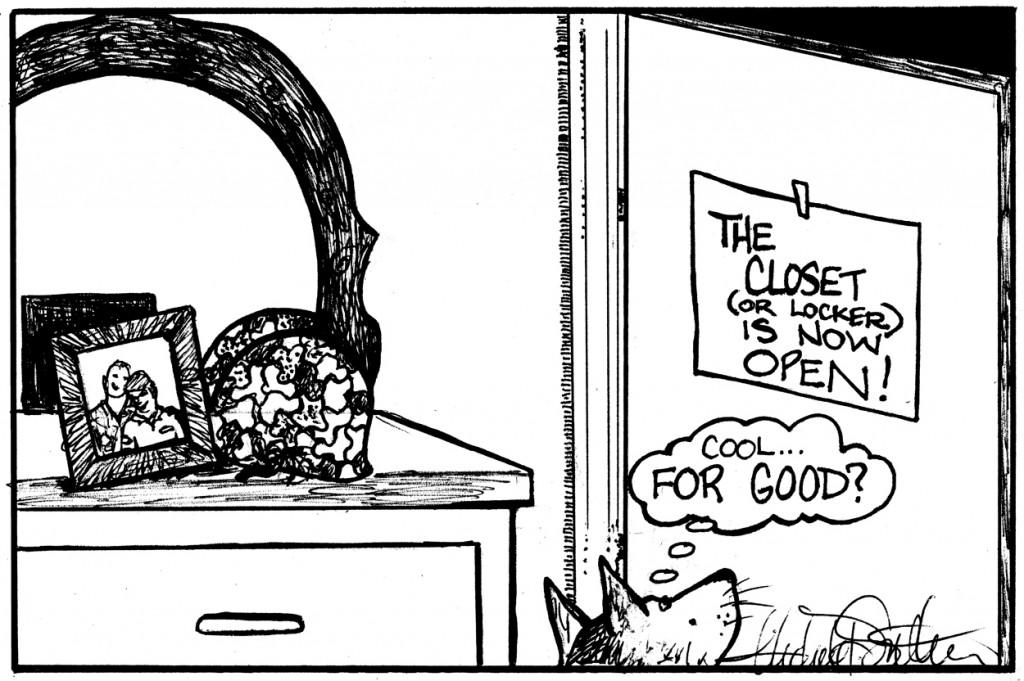 What is the first thing that comes to mind when someone mentions military service members?

In many instances all of these would be the popular answers. But, it definitely would not be, “homosexuals are serving in the armed forces.”

Soldiers, marines, sailors and airmen all have one thing in common; they are putting their lives on the line to protect what this country stands for: freedom, liberty and justice for all.

In 1993 President Clinton and Sam Nunn, former senator and chair of the Senate Armed Services Committee, came to an agreement that they called “Don’t Ask, Don’t Tell, Don’t Pursue.” The agreement was signed into law that November.

The implementation of the “Don’t Ask, Don’t Tell” policy started as a layer of protection for gay and lesbian service members.

Under this new policy, service members could not be asked about their sexual orientation or discharged simply for being gay.

The law did state, however, that sexual conduct between members of the same sex constituted grounds for a discharge.

People do not voluntarily enlist in the armed forces to find a life partner.

The military is essentially a career path or a detour that will, in certain cases, enrich the lives of those who serve. It is a job. It is a lifestyle.

Somewhere along the way the policy mutated into anti-homosexual propaganda that even President Clinton recognized to have become a failure.

Nine military linguists — six of which where fluent in Arabic — were discharged following the attack of Sept. 11 after their homosexuality became known.

The military had already established laws and regulations to maintain order and balance within its ranks.

Laws against insubordination, aiding the enemy and fraternization, just to name a few, helped establish an environment of professionalism and camaraderie.

All service members take an oath to support and defend the Constitution of the United States against all enemies, foreign and domestic, when they enlisted.

The worst kind of enemy is one that allows a policy to degrade our core values as Americans.

Over 14,000 service members were discharged under “Don’t Ask, Don’t Tell.”

That is 14,000 people who could no longer fight for our freedoms.

As a veteran and homosexual I am happy and proud to say that the repeal of “Don’t Ask, Don’t Tell” finally went into effect on Sept. 22.

The military can be a great place for professional and personal growth. It is a place where pride, not prejudice, should be upheld.