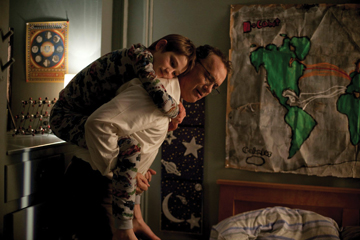 Sometimes it takes seeing things through the eyes of a child to make us realize how far we have come away from reality, truth and love.

In Stephen Daldry’s beautifully directed “Extremely Loud & Incredibly Close,” based on the Jonathan Safran Foer novel of the same name, we are given no choice but to see that unravel right before our eyes as 9-year-old Oskar Schell experiences the loss of his father and best friend, Thomas, after the tragedy of 9/11.

The fact that 9/11 starts this journey will make most think that will be what the film is all about, but they are mistaken.

Oskar (Thomas Horn) is a very smart, very eccentric little boy and we see that in the flashback scenes he has with his father (Tom Hanks). His bond and connection with his father is paternal, but it is also a very strong friendship. It’s like the two share their own language.

The elder Schell pushes his son to grow, think, and experience life in a way most children don’t get to. He sends him on expeditions, teaches him the history of New York City, all the while embracing and never trying to change his son’s eccentricity.

Oskar’s mother Linda (Sandra Bullock) seems to be forever on the sidelines, and that is never more apparent when her husband dies.

Oskar shuts her out. He discovers a key in his fathers closet and decides to find out what it belongs to on his own without including her, by lying to her, and by going to great lengths to piece together how and where that key came from. In a sense, keeping his father alive.

This is a wonderful film; heartbreaking at times and incredibly well crafted and brilliantly cast.

Hanks (“Big,” “Forrest Gump”), shows us that carefree warm soul we have all grown to love over the years with nuance and subtlety.

Bullock (“The Proposal”), mousy and distraught here, is almost over shadowed until the last moments of the film, where she stakes her claim and shows us why she won the Oscar for “The Blind Side.”

The film though belongs to 14-year-old newcomer Thomas Horn.

Starring in his first film Horn grabs on to his character and doesn’t let go. We have no choice but to follow him on his journey because he makes Oskar so real and so heartbreakingly compelling that we have to; we want to.

“Extremely Loud & Incredibly Close” is one of those rare films that has all of the right elements, director, cast, crew and story, and blends all of that talent into a harmonious, touching film. Not to be missed.