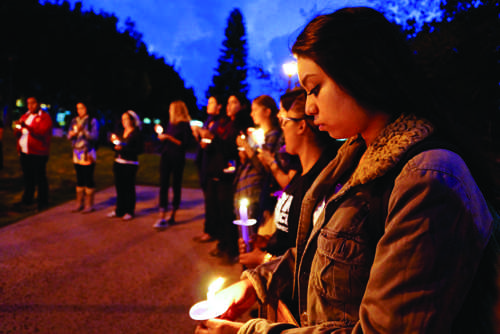 Amidst heartbreaking pauses and tearful eyes, people who knew Diana Gonzalez recounted the unaccomplished hopes and dreams she once had. City College hosted a memorial in her honor on Oct. 11.  The event was also used to promote awareness for domestic abuse victims.

Nineteen-year-old Diana Gonzalez, who was a student at San Diego City College, was brutally slain on Oct. 12, 2010 in a men’s restroom on campus.  The only person charged in her slaying, 37-year-old Armando Perez, was Gonzalez’ husband of 10 months at the time of her death.

“Oct. 12 will always be a difficult day for me and my family,” read 24-year-old Janette Gonzalez, the sister of the victim. “I knew. We knew. The family knew about the abuse. We contacted the police about all of the problems Diana was going through with her husband.

“Domestic violence is very serious, it can happen to anyone, and it affects everyone. Really question your family, friends, and relationships.”

As reinforcement, 32-year-old Beatriz Luna, a cousin of Gonzalez, added with great concern, “People should be educated. I urge everyone to educate themselves on the different forms of abuse.”

When being asked how one could get into a situation of being the victim, Luna explained, “It is because of lack of education, they do not know the signs of the abuse and they do not understand what is considered as abuse.”

Luna concluded by saying, “This is why I can’t stress to tell everyone to educate themselves about domestic violence and those who are going through abuse.  I urge them to tell someone, anybody, anyone that can help. A community, a family member, or a friend.”

The candlelight vigil in Gorton Quad followed the remembrances of Gonzalez, where family, friends, and everyone else that attended gathered around in a large circle to have a moment of silence.

After the candlelight vigil, the speaker of the event, 24-year-old City student Andres Sandoval, spoke about his concerns regarding domestic violence.

“Though I have not known Diana well enough, I can show my concerns because I have a sister who is the same age as Diana. I have an extreme degree for accountability to speak on this matter,” he said.

When asked the best way to get involved in helping a victim of abuse, Sandoval replied, “The best advice I would give a victim is to remove yourself from the abuser and let an authority figure know about the abuse.”

There were about 16,000 domestic violence incidents reported in San Diego County in 2011. Fortunately, laws have significantly changed, and with them attitudes in an attempt to provide support to survivors and reduce the incidences of domestic violence. October is National Domestic Violence Awareness Month and people can show their support by becoming informed about how to prevent abuse and eventually putting an end to domestic violence in America.