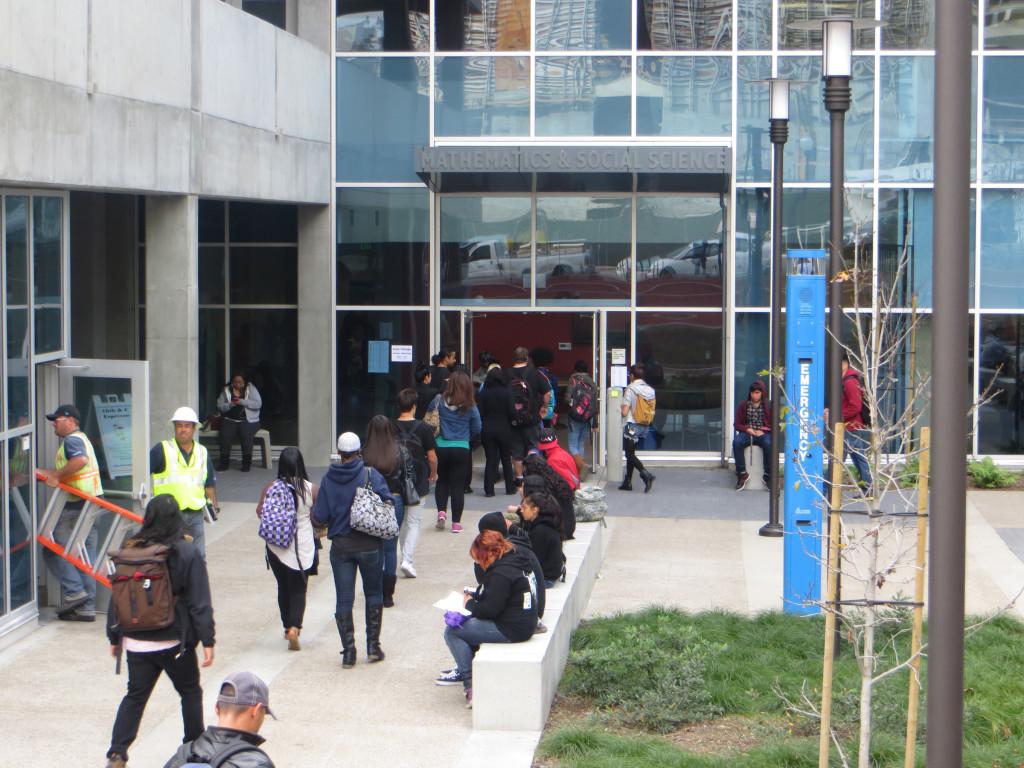 Students enter the Math and Social Sciences building for their first class, which has been open since Jan. 28. The building is located on C St and 16th St. -Ally Browne, City Times

The new Math and Social Science (MS) Building, located on the corner of 16th and C street, is officially open for the spring semester.

At approximately 66,000 square feet, the building adds 398 parking spaces, 33 general use classrooms, and multiple faculty offices. The main areas of study hosted in the new structure include Mathematics, Social and Behavioral Sciences, History and Political Sciences, and Black and Chicano studies.

Also included are a Corporate Education Center, a Dean’s office, offices for the District’s Military Education Program, and lease space for the Family Health Center’s of San Diego.

The building also features an additional book store that provides students the chance to pick up last-minute classroom essential without having to rush onto the main campus. Across from the bookstore is a convenience store that brews Starbucks brand coffee. Both are open from 7 a.m. to 8:30 p.m.

Though the extra parking is a much needed respite, the building itself has been met with mixed reviews from students.

“I love how new this building is and I love the coffee. It feels like a really high end university,” Tyler Brunghart commented.

When asked what his favorite part of the building was, Rob Wyllie said, “I love being able to park in the same building I have class in. It saves me a lot of time since I don’t have to walk like a million miles to class.”

Not all students have been entirely satisfied with the new structure though.

“It feels like they’ve crammed everyone into this one building. The elevators are too damn slow, and then when they finally do come we’re packed in like sardines,” remarked one student who had been waiting at the elevator for almost ten minutes.

Kayla Ramirez also questioned how well the air conditioners were working. “It feels like a sauna in here. I asked my teacher to turn on the air and he said he couldn’t.”

Political science teacher Ken Clark has mixed feelings on the new building. He says, “There’s not much not to like. I like the accessibility. In the past the offices were often far from the classes, and the new technology, once you get used to it, is great. The classrooms aren’t as large though. They’re supposed to fit 40 students, but it feels really tight.”

According to the San Diego Community College District’s website, the construction cost $80.9 million and took about two years to complete.

The project was funded by Proposition S, a $685 million bond passed in 2002 to repair and build new facilities.

A few other projects from the measure include the addition of the Career Technology Center (V Building), the renovation of the R, P, C, A, and L buildings, and the construction of the Humanities and Business Technology Building and the Science building.