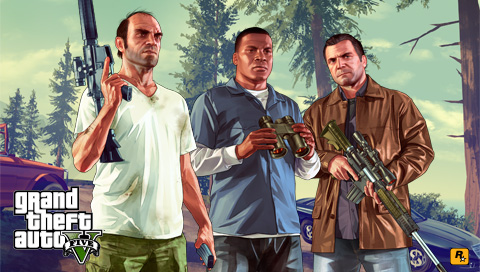 The newly released “Grand Theft Auto V” continues the over-the-top nature of the series and sets a new standard for what future open world games should try to emulate.

The story centers around three playable protagonists, something completely new to the franchise. Michael, a retired bank robber who moved to Los Santos with his cheating wife, ungrateful son, and spoiled daughter, lives a miserable life; Franklin, an ex-dope dealer and gang member with no real family other than his aunt and dog Chopper; and Trevor, a former associate of Michael’s, whose motives and goals are unclear.

The three eventually team up to pull off a very well thought out bank heist allowing players the chance to decide how it should be pulled off and which other criminals should be recruited to aid in it.

These three new characters add a new feeling to the game that no other GTA game has done until now. They seem like different people living their own lives and I’m just helping them get to where they need to be.

It should be noted that the game received an “M” from the Entertainment Software Rating Board, a rating that it throroughly deserves. Playing through both the story and free roaming exposes the player to graphic events, such as torture, murder and kidnapping.

The mechanics of this game have been completely remade, meaning even returning fans of the series will have to learn how the game play functions.

Shooting isn’t as easy with certain guns in the beginning of the game, however, going to the shooting range will make you familiar with all the new guns and even unlock new weapons. Driving around feels far more responsive and realistic. An added bonus is all the impressive customization that you can put into your car. The options for that function are endless.

Each character has their own skills and abilities, giving each of them their own feel and independence. There are also specific character abilities, such as Michael’s ability to stop time, Franklin’s ability to accelerate his car through traffic, and Trevor’s damage buff ability. These new abilities mean that players must remain engaged and forced them to think more strategically in missions.

Missions are in-depth; they made me feel like I’m actually watching a story instead of just going from point A to point B. Each mission does hold a purpose and the heists are all carried out very differently, one heist can involve using a helicopter and parachutes while the other could require a more stealthy approach.

Between missions, players have the whole map to go anywhere and do anything they want, including unlocking different hobbies. The activity options are beyond amazing, I found myself not knowing what to do at first because of an excess of things I could try.

Each activity serves a purpose now. Doing a few triathlons, for example, helped Trevor gain more stamina and dexterity and it showed in some missions where he needed to use his fists.

There are also stranger missions for each character where they help out someone and earn cash. These side quests can even boost certain skills of theirs and add the stranger as a personal contact. As you progress through the game, you can eventually do these random side tasks that appear as you explore the open world.

Rockstar Games, GTA’s publishers, promised a big map and they very well delivered, making the player travel extreme distances at times to get to a certain mission. Certain parts of the map will change how the player interacts with it, such as Blaine County’s redneck citizens and wildlife as opposed to Vinewood’s upper-class citizens. While in these areas, I often felt as though I wasn’t playing a GTA game.

The graphics in the game are truly “next-gen,” like when you wear certain clothes for a time and they get dirty. The mountains look like a beautiful picture, yet you can walk on them and really see the detail in them.

Sound has also had a lot of work put into it. Radio stations, a GTA staple, make their comeback with DJs voiced by celebrities and music from almost every genre.

The game froze on several occasions. These freezes did go away so I didn’t have to restart my system but they were a bit annoying. There were also times when the game had to render areas, I accidentally went into one of these areas and feared I’d fall through the map but thankfully I didn’t.

Overall, the game is amazing and I highly recommend. The story is very interactive, and the new characters bring elements to the series that you have to play to experience.