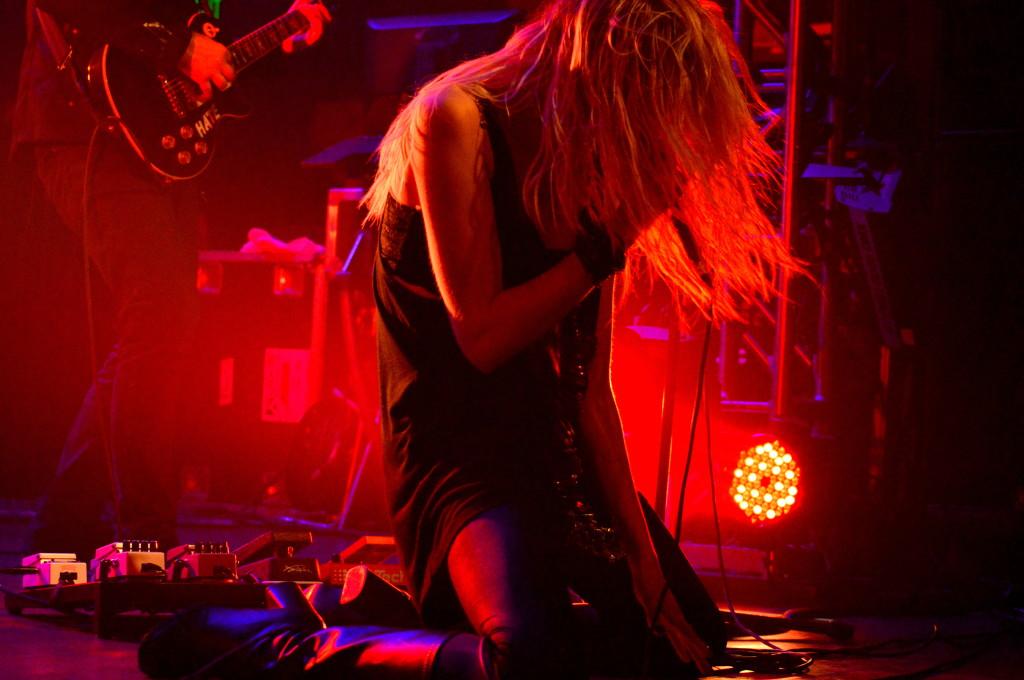 Pretty Reckless front woman Taylor Momsen performing at the House of Blues in Downtown San Diego on Oct. 9 as part of the "Straight to Hell" tour. Issa Lozano, City Times.

After a long, almost 18 year career in the film and television industry as an actress, singer, song-writer and guitarist Taylor Momsen is finally doing her own thing as the lead front woman of rock band The Pretty Reckless.

You’ve probably seen her as one of the lead characters on The CW’s hit show “Gossip Girl” or maybe on giant billboards as the face of Madonna’s Macy’s “Material Girl” fashion line, but really though this girl can rock.

The Pretty Reckless’ debut LP “Light Me Up” was released in 2010 along with the U.K. chart topping single “Make Me Wanna Die” and now with a full length LP, two EPS and a new album officially recorded, the band are finally hitting the stages again on their Going To Hell” Tour.

“The tour so far is great. We’re finally getting the flow of things,” she said. “It’s a little rough at start, we’ve got an awesome set together and you should expect a crazy loud show and we’re gonna play some new songs.”

The Pretty Reckless are no strangers to the stage. The band has had two international tours supporting their debut LP and have opened for rock legends like Guns and Roses, Marilyn Manson and even Evanescence. “We’re having a blast on all the new stuff, because we’ve played (debut studio album) ‘Light Me Up’ so many times.”

The band recently released their new single “Going to Hell,” a rock infused track were Taylor screams ” For the love that I make I’m going to hell.” The new album has been finished and is waiting to be released next year. Don’t look away yet though, a slew of music videos and singles will be released just in time for its debut.

Making a record wasn’t so easy this time around. “Going to Hell” took almost two years to be completed.

“The recording process was complicated and unintentionally took longer than planned,” Momsen explained. “We started in a studio in New Jersey and it was awesome and we had such a good vibe and then Hurricane Sandy came in and just wiped out the place, Literally all our gear, millions of dollars of equipment under eight-feet sludge and water.”

The hurricane and all its power didn’t stop the band though, and as soon as they found a new studio the album recording went full force.

“Good things come out of tragedy. We actually wrote the song ‘Going to Hell’ after the hurricane. We were looking for a line to sort of some up the whole record. As we were writing, a theme started to develop,” Momsen said.

“Going to Hell” has reached a new sense of maturity for the Pretty Reckless, what once started out as a side project in between filming, has grown into a full fledged band and a finely developed distinct sound.

The record is an emotional and cut throat continuation of “Light Me Up,” a slew of chapters in a girl’s story lost under a world of loss, lust, drugs, religion, sex and all things rock and roll.

“It’s heavier. We kind of defined ourselves as a band after touring for two years and playing together so much. This record finally sounds like us. We started when I was 15 and now I’m 20 so there’s definitely a big difference,” Momsen said. “We’ve evolved. When we wrote this record we went in with no boundaries. Whatever we wrote, we wrote. The record is very, very raw and honest. I want people to hear it for the first time and have a completely open mind to it.”

As far as her “Going to Hell” tour, it’s exactly as promised. Momsen and her show in San Diego was loud with a hot crowd fired up and ready. Taylor and her band took to the stage to pull a true rock and roll set with grit and energy.

The setlist was filled with new tracks like “Follow Me Down,” “Sweet Things,” “Kill Me” and even older favorites like an acoustic take on “Just Tonight” and “Zombie.” The Pretty Reckless were not shy about turning the amps up high.

For additional “Going to Hell” tour dates and more information on Taylor Momsen and The Pretty Reckless visit goingtohell.me.