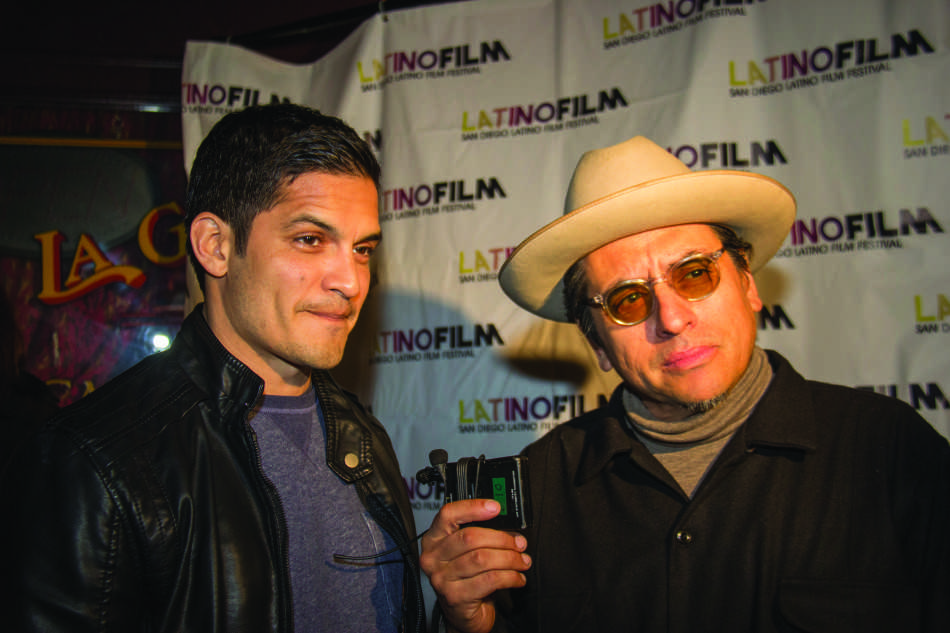 Mexican-American actor and playwright Richard Montoya is the founder of the satirical troupe Culture Clash, which is gearing up to release its play-turned-film, “Water & Power.” Opening May 2 in AMC theaters nationwide, it will be featured at the San Diego Latino Film Festival beginning March 13.

Culture Clash will celebrate its 30th anniversary in 2014, the release is just three days shy of the battle of Cinco de Mayo, and according to the cast, the film came together in an alchemic 12-straight nights during September 2012, the month of Mexican independence.

Montoya emphasizes his storytelling through Chicano roots beyond the script’s pages, putting the audience in the struggle between twin brothers, “Water” and “Power,” nicknamed by their father, a hardworking ditch man for the Los Angeles irrigation department.

Water becomes a decorated cop and Power, a senator, both rising in prominence while being pulled by corruption’s strong current in the influential forces of Los Angeles.

Montoya explained this story during an event last month to promote the San Diego Latino Film Festival. The poetic tragedy for the movie is the city’s decision to cut people off from nature by cementing over the Los Angeles River, he said. However, central to the film is also the brothers’ bond tested one night by a good deed gone bad. In their father’s words, “Water and Power can’t have one without the other.”

Montoya asserts, “It’s an American story with deep Chicano roots; it’s classic American. All the cautionary tales from (the) Irish, Jewish and Polish have been told masterfully and Chicano culture has come up short due in part to lack of opportunity and skill set, but we hold the staunch belief we have to take our place within the American storytellers.”

The director adds, “Within the milieu we must consider our responsibility as storytellers and ‘Water & Power’ can play Jersey, Chicago or Miami and not just be a story that’ll play in the barrio.”

The formula for writing the screenplay was a revealing lesson in filmmaking for him. Montoya got some tough love from the professionals of the Sundance Institute, where he studied in the directors’ and writers’ labs.

“You have to beat the play out of it because cinema is a language all its own and it’s visual, moves and can be primarily poetic, sweeping and cinematic,” explained Montoya. “A play, you listen to language and that can kill a movie if it has too much; you have to create a balance.”

Referring to actor Nicholas Gonzalez who plays the role of Power, Montoya adds, “In film, I can look deep into Nick’s eyes, it’s intimate in that sense. It’s what’s utterly exciting about cinema; you’re not limited by stage distance.”

Gonzalez’s role staring in the Showtime hit series “Resurrection Blvd.” was his entry into Chicano culture. As a Texas Latino, he notes, “The Chicano movement was something we learned in history. It’s what the people in California called themselves and never thought differently about it.”

Gonzalez, also interviewed at the Latino Film Festival event, expressed that he felt more connected to the Chicano culture after moving to California to attend Stanford University.

“…Via ‘Resurrection Blvd.’ and seeing how embroiled the Chicano experience is into politics and labor rights, you can see there’s much more character than the fabric that makes up the tapestry,” revealed Gonzalez. “I became attached (to the Chicano activist experience) through Richard’s writing and meeting people, culminating with ‘Water & Power’…”

Montoya explained that he takes experiences from his family life and infuses them into his filmmaking.

His late father, Jose Montoya, who attended City College through the GI Bill, painted murals in San Diego’s Chicano Park. Then, while working as an educator and becoming Sacramento’s poet laureate, he taught and formed a fundamental part of Cesar Chavez’s United Farm Workers’ art group — the Royal Chicano Air Force. His troop would tote around their screen printing presses to Central Valley farms in a Volkswagen bus creating protest posters.

Montoya is continuing in his father’s tradition with “Water & Power,” and takes pride in his Chicano cultural roots, telling a story in which things get out of hand and go wrong when reaching for power too fast.

Water & Power will be shown on opening night of the Latino Film Festival, March 13, at 9:15 p.m., and again on March 22 at 6 p.m. See sdlatinofilm.com for more details