The Invigilator – No hiding behind the shield 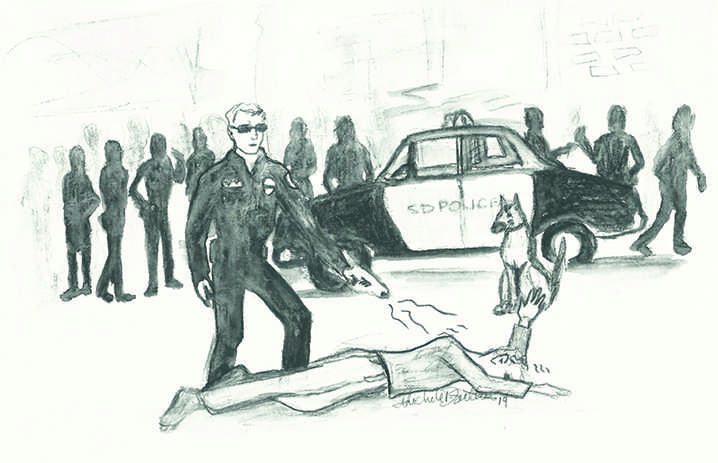 Joe Public used to be equal with the law in the US. Everyone funded their aptly-named peace officers and in return trusted them to serve by protecting. This symbiosis was legally outlined and happily adhered to by most citizens, and most peace officers.

But a stormy sea change took place. Recently, technology made videographers and documentary short producers out of everyone. Televised for all with an Internet connection: police brutality. It’s rampant. It’s spreading. And it’s 100 percent prohibited in a free society.

Blacks and Latinos frequently report to me that police brutality is nothing new, and I believe that because racism armed with a baton is a fatal scenario.

What’s new are the 50,000-volt, standard-issue Tasers that painfully disrupt a body’s ability to communicate with its muscles. Considering the heart is a muscle, it’s no surprise there have been more than 500 Taser deaths at the hands of law enforcement in the U.S. since 2001.

Did you catch that? Somewhere along the way, we trailed away from referring to our protectorate as “officers of the peace,” and the era of “law enforcement” ensued.

The beginning of the end was a two-fold Nixonian debacle: the Vietnam War era protests and the inception of the drug war.

The first injustices always receive the most ardent responses.

Deaths resulting from confrontations between police and citizens nationally were 258 in 2009 and 247 in 2010 in the latest figures available.

Then there’s the drug war that created a deadly arms race between criminals and police officers. As gangs stockpiled, cities and counties trumped them with SWAT teams full of assault and sniper rifles, stun grenades and submachine guns.

Sound militaristic at all? It is, and that’s the root of this problem we have today – law enforcement treating the general public as enemy combatants.

Our recent downward spiral began with the merciless beating of schizophrenic Fullerton man Kelly Thomas in July 2011. Even after killing Thomas by tasering him five times while he screamed for his daddy, then bashing his thorax in and breaking every bone in his face, all three officers were found not guilty of all charges.

Lowlighting the next few years:

On Memorial Day 2013, 14-year-old Tremaine McMillan was feeding his puppy and playing on the beach in Miami when the police – full-grown, heavily armed men – aggressively threw McMillan to the ground. They violently choked him while yelling, “Stop resisting!”

The boy was badly bruised and his dog was injured. In response, the Miami-Dade Police Department stated, “Of course we had to neutralize the threat in front of us.” McMillan was supposedly seen roughhousing with another teen on the beach.

On Jan. 3 of this year, a 64-year-old deaf man named Pearl Pearson was beaten for seven minutes by two Oklahoma State troopers when pulled over for not showing his hands – when issued a vocal command to do so from behind.

His car door correctly read “driver is deaf,” and a statement released later revealed that, “not during the booking, hospital, or time at the jail was an interpreter provided.” Yet, the elderly man is still facing charges for resisting arrest.

And closer to home, we report in this issue about a City College student who had a unlawful cigarette turn into a hospital visit for strained wrists and a chest contusion after being slammed into a trolley car by MTS security.

Have we lost our grip on what excessive force means? Can the public only protest so much, or are people simply becoming callous to police brutality? Are some police officers imbalanced by the rigors of crime fighting? Are epidemics such as steroid usage among officers and depleting budgets limiting proper training to blame?

Guess what? It doesn’t matter because whether behind the shield or not, no one should beat up a schizophrenic man. No full-grown man should choke a teen-age boy for any reason. No able-bodied group of adults should attack an elderly deaf man. And no security guards should body-slam a college student. Ever.

There needs to be an immediate return to using far less lethal ways – as an officer – to bring peace to their citizens.

The Invigilator is a personal column written by Christopher Handloser and is not a staff editorial.