The Invigilator — We the people do not need militarized regulation 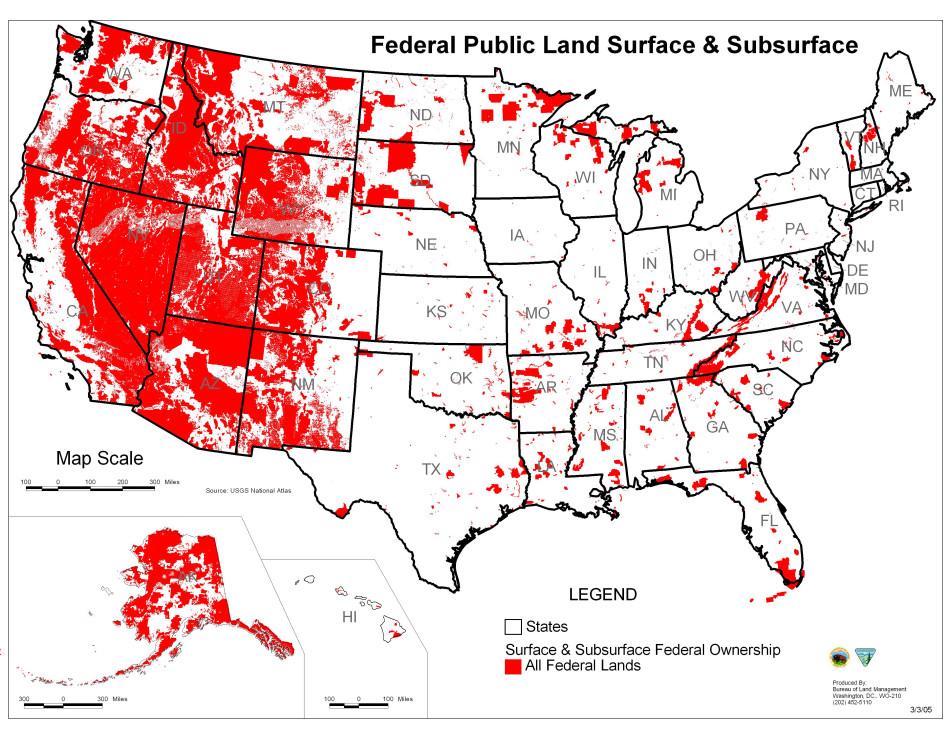 The east is mostly privately owned land, but in the west, much of what were public lands have been purchased or protected by the federal government. (Courtesy graphic)

About 80 miles east of Las Vegas, there is a conservation effort gone horribly wrong.

The decades-old conflict between the federal Bureau of Land Management (BLM) and a family of ranchers named Bundy, started when the US Fish and Wildlife Service listed the desert tortoise as an endangered species.

The center figure in this debacle is Cliven Bundy, a cattle rancher, organic melon farmer and Mormon, whose family has been ranching on the lands the tortoise inhabits since 1877.

Shortly after the desert tortoise became designated as “threatened” in 1990, it became very apparent that Bundy was not willing to recognize the authority of the federal government over his lands, and was not willing to negotiate and purchase “grazing rights” as the feds wanted him to.

Whether you agree with Bundy or not – whether you like Bundy or not – it is baseless and preposterous for the government to provoke an armed civil conflict between the BLM and the Bundy ranch supporters over the protection of a tortoise.

First off, who are the BLM?

The BLM originated out of the need to survey new public lands as they were discovered, or collected from Revolutionary War-era treaties with England, Spain and France.

In the early 20th century, debates over grazing rights were actually handled by the US Grazing Service, but in 1946, that service was merged with the General Land Office to form the BLM, in the Department of Interior.

It was at this time that the BLM was refocused on long-term preservation of public lands.

So, what are public lands?

Western states received public lands as trust lands when they joined the union under the Equal Footing Doctrine, established in Lessee of Pollard v. Hagan(1845), where the Supreme Court gave the states control over all public lands.

So fast forwarding, the main quandary surrounding the Bundy Ranch conflict is – why are the BLM strapped up like military commandos when in fact they’re a bureaucratic office trying to unconstitutionally regulate public lands in the name of conservation?

Granted, property rights are tricky, though they’re supposed to be held as sacred with constitutional fortitude. However, whether the Bundy’s are right or not, and the BLM’s public land regulation amounts more so to a federal land grab or not, there are designated ways for the federal government to assert it’s authority.

Nowhere in constitutional law does is designate that the feds can swoop in and point assault rifles at civilians and members of the press in order to enforce a land dispute.

But it get’s better, and by better, I mean worse.

Video footage shows that the so-called conservationists at the BLM, in one recent encounter with the Bundy Ranch supporters, killed two prized bulls and ran over a desert tortoise den while attempting to seize Bundy’s cattle.

And if that wasn’t incendiary enough for you, national politicians are chiming in and raising the rhetoric in this conflict to label the Bundys and their supporters as “domestic terrorists.”

As if the line didn’t need to be drawn yet, in the post-9/11 age, US citizens, including politicians, need to be ever so careful who they deem are terrorists. The feds have constructed intense laws regarding the handling of terrorists.

Under the 2013 National Defense Authorization Act, a suspected terrorist can be held indefinitely, without trial, by the military. So whether senator Harry Reid (D- NV) recently threw the word “domestic” in front of it or not, the designation of “terrorist” could land Bundy in a military prison indefinitely – over alleged illegal cattle ranching.

What does all this cause? A polarization of civilians; one side ready to damn gun- toting ranchers acting on behalf of environmental conservation, and one side ready to defend the constitutional rights of free citizens to the death.

The media effectively swooped in and bastardized this conflict as well. A sound bite was unearthed featuring a rurally bathed speech from Bundy claiming that black people might’ve been better off as slaves then living off of government welfare.

Where I would’ve raised an high eyebrow if I were listening to this, I frankly cannot care whether this man is a bigot or not. I’m not trying to have a beer with Bundy or attend one of his 14 kids’ birthday parties.

What I will do is scoff and scream to high heaven whenever the federal government’s actions could actually create a civil war with this man over environmental regulation.

The Invigilator is a personal column written by Christopher Handloser and is not a staff editorial.