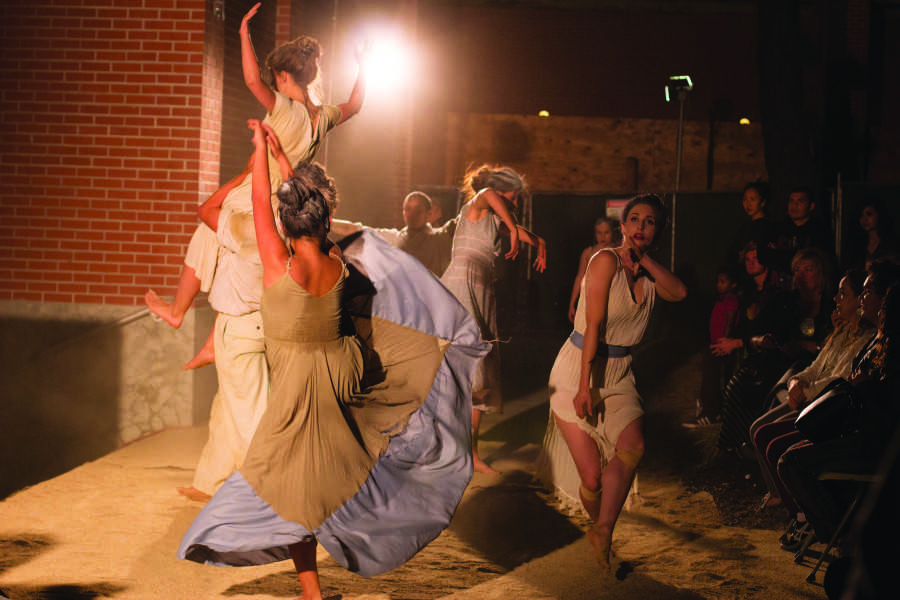 The dancers in “The Salton Sea” playfully sprinkled the sand around during opening night of “Dancing on the Fine Edge” May 8. Photo credit: Celia Jimenez

The show could not be contained on one stage.

Black-clad performers embodying an oil spill. Dancers tossing up sand with their hands. A group of young men and women sliding down parking lot stairs.

Each of those scenes, and four more, comprised “Dancing on the Fine Edge,” presented by about 40 dancers on May 8, 9 and 10 in and around Saville Theatre.

Alicia Rincon, the show’s director, spoke about its roots.

“I had the idea to blend all these beautiful and unique art pieces with dance,” said Rincon, co-chair of the Visual and Performing Arts Department.

She presented a show using this concept in 2008 at City and revived it for the Centennial celebration.

Planning started a year ago. She invited the dance professors to meet their counterparts in Visual and Performing Arts.

“To let us match ourselves up with whoever’s art we found interesting,” said Natalia Valerdi, a dance professor, who choreographed one of this year’s performances.

From that point, it was up to the dance professors to create choreography and set design that would make use of the visual artist’s work.

The production was organized like a museum tour, with the tour covering spaces inside and outside the theater, including parking lots, building walls and the lawn.

The dance professors functioned as docents, guiding the audience from one performance to another, providing context for each piece.

“The audience is another interesting piece of the puzzle,” said Rincon. “It is not traditional; we are not dumping the audience into the auditorium. It is a moving exhibit.”

The pieces themselves touched on poignant topics.

In “Spill,” images of industrial oil production were projected onto the theater wall. The dancers, wearing sleek black unitards, slid down the stairs to the parking lot, where they entrapped a roller-skating, bird-like figure and wrapped it in black fabric.

In “Salton Sea,” a photograph of a chair on the shore of the sea was recreated on the sidewalk covered in sand next to the theater. A group of performers, wearing light blue and gray, danced in the sand, stirring it into the air.

Professor Debi Toth-Ward choreographed that piece, based on an image by photography professor David King.

“David’s photo of Bombay Beach is very desolate and barren,” she said. “Everything is dying there.”

The director’s sister, Patricia Rincon, a dance professor at UCSD, choreographed “Underworld.” Inside the theater, the orchestra pit was transformed to represent a dystopian past. Two female performers danced around each other. One had a red mane reminiscent of fire, and the other’s hair was tangled into a crown of branches.

The piece explored “mythical characters and the mystery of cultures that disappeared for no reason, so we created these two characters that are half animal and half human,” Patricia Rincon said. “They have a sense of loss because of their developed culture is gone.”

Each dance had accompanying music, which ranged from live singing and drumming to taped hip-hop tunes.

The lighting was provided by spotlights, projectors and the moon.

In “Through and Around,” performed in Curran Plaza, spotlights illuminated the lawn with warm light. Colored sheets were hung from the awning adjacent to the grass. Lights behind the sheets projected their color onto the lawn. During the performance, the dancers placed themselves between the lights and the sheets, casting their shadows.