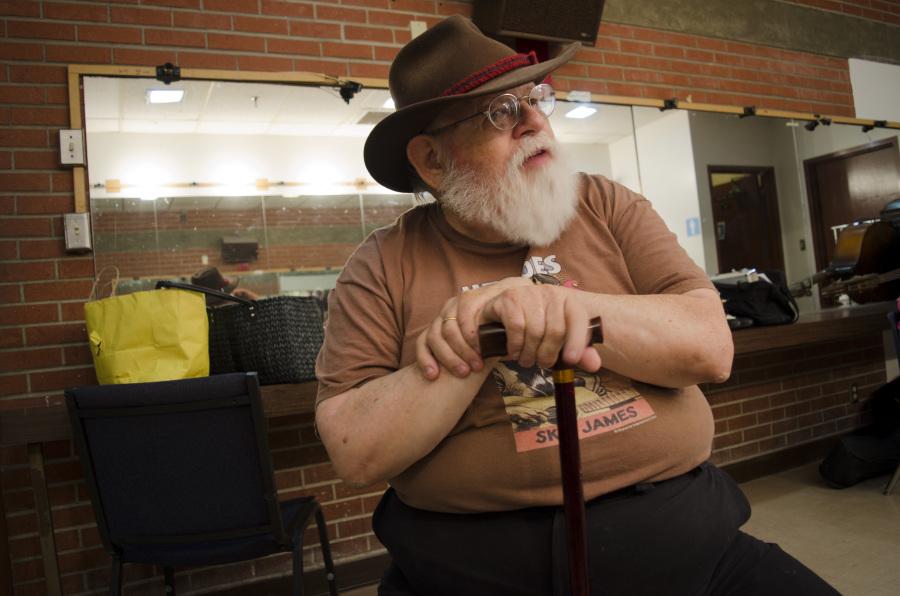 With his passion for keeping traditional music alive, music junkie and pioneer Lou Curtiss has put San Diego on the map. Known to most as the owner of hidden gem Folk Art Rare Records, Curtiss has also served as the San Diego Folk Festival founder since 1967 and hosts the “Jazz Roots” radio show every Sunday night on Jazz 88.3

Jazz Live held a tribute for Curtiss on Sept. 9 with performances from Janet Klein and Her Parlor Boys and Jeffrey Joe with Trio Los Besos. KSDS’ monthly installation welcomes an eclectic array of musicians to perform and celebrate the roots of music.

Curtiss credits a handful of things to his success, mainly making the right connections with music lovers and constantly having something in his ear.

“I’ve listened to an awful lot of music. Stuff I’ve probably never listened to given I didn’t have a record store,” Curtiss says.

Inside the theater seats are filled with Lou Curtiss fanatics, chanting “Lou!”over and over again. Jeffrey Joe and his band kick off the night with a classic blues, rockabilly performance.

Joe shares how he met Curtiss at Mar Vista High School in Imperial Beach, “Lou was throwing a hootenanny, it was 1964 and I was the only from my high school who volunteered to play.”

Humbly enthralled by the news, Curtiss states, “It’s been a long time comin’.”

Janet Klein hits the stage and Her Parlor Boys follow, fumbling into their positions on stage. Janet’s conversation makes an instant connection with the audience with a bright and vibrant voice. The boys play off of Janet in between songs talking to each other, joking around. Klein has a step that is jumpy, dancing not too far from her microphone, she is center stage.

Both acts showcase music that Lou would play on his radio show, pick up at his record store or ask to perform at one of his many festivals.

At 75, Curtiss’ demeanor is organic and triggered by telling things as they are.

“I’ve always said listen to some kind of music you’ve never heard before because you might find you like it,” says Curtiss.

“I’ve enjoyed it why shouldn’t anyone else,” he adds when talking about the importance of preserving traditional roots of where he believes music began.

Allowing musicians to come to San Diego through his festivals or just helping someone find a vinyl, Lou is proud of what he has done for his city.