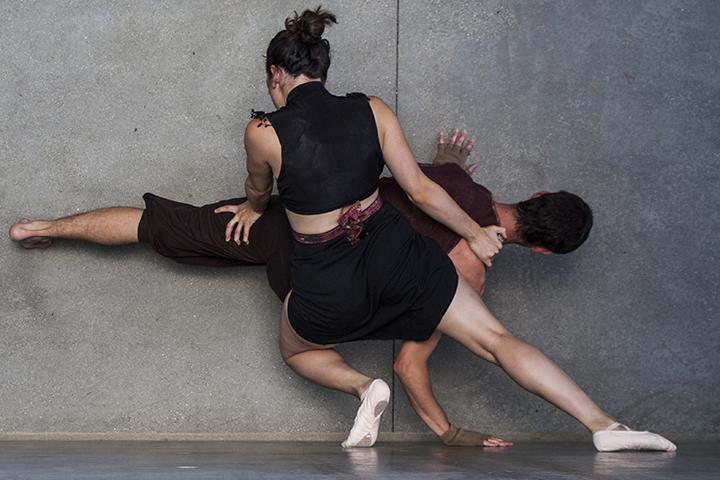 Ariana Siegel and Jedi Taylor perform an intimate dance at the bottom of the Business Technology building's back stairwell. Photo credit: Torrey Spoerer

Hundreds of spectators and dance enthusiasts paid a visit to City College for their first stop on the San Diego Dance Theater’s 16th annual Trolley Dances tour’s first day on Saturday, Sept. 27. The tour went on for two weekends total, first on Sept. 27-28 and the last on Oct. 4-5.

“One of the goals for the trolley dance program is to help build ridership with the San Diego Metropolitan Transit System and to make people less dependent on their cars,” Jean Isaacs said in an introductory speech given to each tour group before the first performance. “In fact, many people participating today have never rode the trolley before.”

“Every year, the trolley dances are somewhere else. We work with the San Diego MTS that runs the trolley lines,” San Diego Dance Theater’s promoter, Toni Robin, explained.

“We thought that (the City centennial) was an ideal situation because many of our dancers and choreographers either teach at City or go there,” said Robin. “So we started to tie in.”

The tour started at the front lawn of the LRC building located off of Park Boulevard and C Street with the first dance routine being on the grassy hill.

Choreographed by City dance instructor Terry Wilson, 10 dancers wore backpacks and yoga clothes as they skipped along the grass and climbed up and down trees, while tour attendees watched from behind the walkway facing the hill.

Including the lawn performance, there were a total of three dances on the City campus, one of them at an unusual site to help showcase the new buildings.

That unusual site was the thin back stairwell of the Business Technology building where two dancers, Ariana Siegel and Jedi Taylor, performed a gloomily romantic and vertically multidimensional piece choreographed by Jean Isaacs.

Attendees were able to watch from the crammed and small front row or from the balcony opening directly above, making the viewing of the performance a multi-interactional experience. Led by their guide to the City College Trolley Station, attendees then boarded the Blue Line trolley to the 12th and Imperial Ave. Transit Center.

There, participants watched choreographer Michael Mizerany’s performance underneath the transit center’s clock tower, which cleverly applied the playful structure of the steel beam supports of the tower into the performance.

Attendees followed their tour guide to board the trolley again, this time onto the Orange Line to the Market Creek Plaza Amphitheater where they were greeted by Isaac’s nine-dancer-led interpretation of an ancient Cuban ritual snake killing.

Following the Cuban dance in the amphitheater was the final dance on the tour, with attendees standing on the stage and watching the performers descend down the rows and steps, rather than the typical other way around.

“Gene wanted me to be in this site (the amphitheater) and I didn’t want to traditionally have everyone sit up on the amphitheater rows so I flipped it around,” said choreographer Grace Shinhae Jun.

“A lot of thought (regarding this location’s dance routine) was to go think about southeast San Diego, the demographics here, the current situation happening all over the country, and the focus on Ferguson as well,” said Jun.

“My major isn’t dance, but it’s always been a hobby of mine,” said Victor, whose major is actually criminal justice.

After the final performance, attendees left by trolley back to the City station, while later groups of guide-led participants continued to circulate the same route until 2 p.m.