A jump, a jive and a Broadway lullaby – Songs and dances from the ’30s and ’40s come alive and dazzle in two-hour musical revue ‘All Night Strut’ 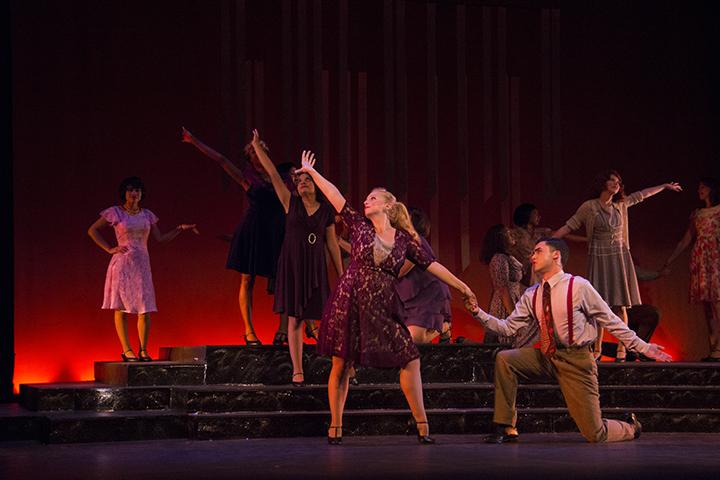 On stage the actors of “All Night Strut” perform a mixture of songs and dances from the different eras of history between the 1930s and ’40s. Photo credit: Celia Jimenez

Reaching beyond the experiences within their own generation, the young stars in the cast of “All Night Strut” entertain, sung and danced their way through history as they brought to life an era from the 1930s and ’40s, in a musical revue at the Saville Theatre.

“This is a fun, exciting show with enough variety to really keep the audience engaged,” June Richards, co-director, said.

Richards also explained that the program for the “All Night Strut” was chosen, in part, as a final nod from the musical theater department to the centennial celebrations for City College.

Andrea Singer, costume designer and make-up director, said that despite challenges faced in terms of logistics and staffing, the “… willingness to show up was key to their success.”

“They always do a fantastic job. I love what they do,” said student and audience member Carl Sutton.

Sutton’s enthusiasm for this year’s musical performance was contagious as he declared, “I’ll be here all weekend long.”

While typically City sees a large range of enrollments, the theater department has had many of its students are fresh out of high school with raw, unseasoned talent.

“This performance is a fantastic repertoire of music and dance which calls on mature performances from younger budding talents. The average age is 18 and a half,” Richards said.

She went on commenting that this year the cast was a joy to work with.

“They just don’t know how hard they’re working. They take my breath away. All the songs they have had to learn. The dance. They were stretched, but everyone was flexible. Bright, young talent,” Richards said.

Nodding her head in agreement, Singer, began to respond; however, before she could get a word in edge wise, Richards bursts back into the conversation full of passion, “They are doing a wonderful job. They are marvelous, talented, and utterly charming.”

Singer smiled and responded with an affirmative, “Yes! What she said.”

Alicia Rincon, Co-director and Choreographer, said that despite that many of the cast were beginners, they were still expected to learn the music, learn the steps, “… and then, put the music to the steps. And connect the meaning to the music.”

“This is not a class. Here, you have to go out and do it,” Rincon said. “I worked them hard, too. They had to learn steps a little bit more complicated, out of their comfort zone.”

Richards said she took time preparing the cast for this show by exploring the historical background of the songs and understanding the deeper meaning of the music.

“It had a lot of impact … Our students from City can empathize; they don’t come to school with trust funds.,” Richards explained, “I think it really resonated with them.”

During dress rehearsals, all the performers were dressed in their very best, reflecting the pre-World War II era.

Singer described the clothing “Romantic, a little glamorous and a strong sense of nostalgia.”

Lopez is an ensemble singer who is at City for the first semester after attending at Grossmont College.

“I just brushed upon City’s theater program and I kinda jumped right in,” Lopez said. “I felt like the roles (at Grossmont) didn’t really fit me there. June gave me a chance.”