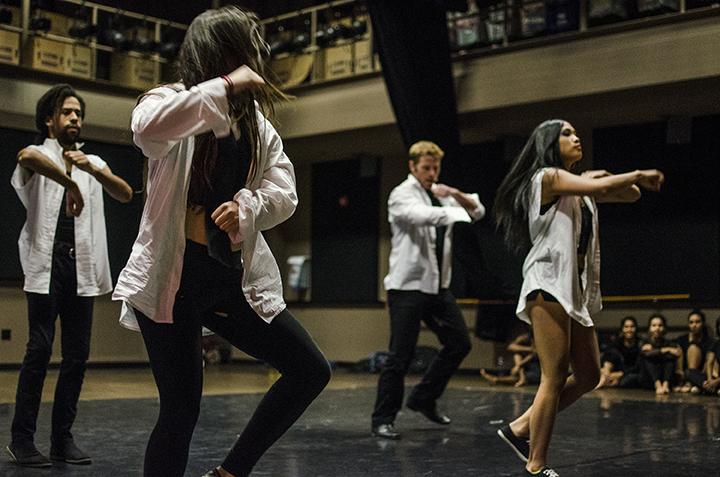 “City Moves” was a fresh breath of air found at the Saville Theatre Dec. 5 and 6, for the student and faculty dance concert, where magic existed and the dancers and choreographers put their hearts out on their sleeve and went for it.

It was fascinating to watch as this eclectic mix of experienced level dancers found their own unique strength or softness to use intentionally, and to communicate feeling or thought. The student choreographers added innovation to the dance concert.

The show opened up with “Indigo Stars” performing light, airy and circular movements. Clusters of dancers were in harmony, using graceful arm extensions to sweep the air around them and bringing in new facets with their interplay of space.

Dante Finch and his dance partner, Nerly Victor, stood out in a powerful piece called “Gone,” choreographed by Finch. Mixing dance styles, both dancers brought it when the switch was flipped from the slow intensity of modern dance to the hardcore street style hip hop.

Victor punched her arms rhythmically and slides into a shoulder roll. Finch comes out using the full length of his long limbs and arms to take on his movements, and he owned that stage. This energetic number made the audience go wild.

“Commander” was fun and flirty, and we all know one thing for sure, Miley Cyrus has nothing on student dancer, Ezeleil Nwaigwe. Nwaigwe’s performance was infectious with her bright smile, her all-out passion and the fast vibrations from shaking her backside.

Faculty choreographer, Debi Toth-Ward, composed, “Three Songs.” This lyrical modern dance piece was beautifully created, with clear articulation in the movement — including horizontal twists, attitude pirouettes, glides, leaps, lion poses and falls. This number took you on a journey, starting from an earthy feel, into the soft elegance of an angel to a bold wild animal.

Talented dancer Brianna Bellamy, was impressive in this piece with her dance vocabulary ranging in emotion and technique. Bellamy allowed the choreographers to tell their stories through her, in four numbers in the show, expressing at times vulnerability and in other moments, strength and power.

“Fight or Flight” used a clever musical composition, starting with a narrator speaking and then transitioning into two cellos playing “The Flight of the Bumblebee.”

Leaning forward in their seats, the audience was immediately intrigued with the performance. This dance landed in a gorgeous final pose, only to be surprised one last time, as a male dancer runs out from the back and leaps into the air.

The final number was “In Sorrow We Breathe” in memory of student choreographer and dancer Bernadette Ondervilla. The room was charged with electric emotion, and the audience took in every movement with gaping wonder and interest.

There was beautiful chemistry from the two lead female dancers, and the other 12 dancers layered in a swell of complexity and intrigue. A wild abandonment could be felt, as the dance flowed from contemporary to hip hop, and with two male dancers impressively spinning off the floor.

The show was diverse in style, form and composition and remarkable talent was demonstrated both among the students and faculty pieces.