Songs for the lovers, the haters and everyone in-between 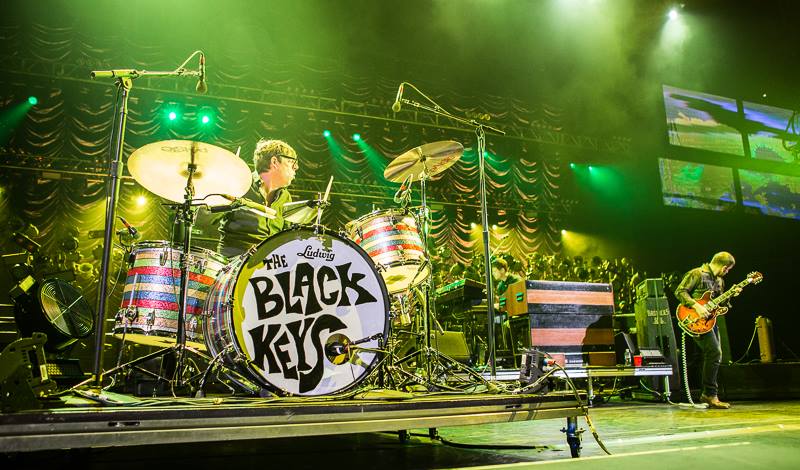 The Black Keys performing during a concert in Brooklyn, New York in Sept. 2014. Official Facebook image. Photo by Melinda Oswandel.

Every Feb. 14 people in relationships do the exact same thing. Grab some flowers, a heart-shaped box of assorted chocolates, a generic Hallmark card with a generic ‘I’m yours, be mine I love you, hooray for us’ message etched inside the fold, dinner reservations and maybe tickets to a movie or a show. It’s the same song and dance every year. On the flip side, some people don’t even bat an eye to one of America’s commercially successful holiday’s and spend it either mocking others who fall into the same yearly routine or sit at home and mope over the fact that they’re single. Whatever your case may be, here’s a list of some tunes for the lovers, the haters and everyone in-between.

1. Frank Ocean – “You Are Luhh” (Aaliyah/Isley Brothers- At Your Best cover)

The Ocean is on hiatus. Imagine Frank chilling out, humming on a beach somewhere and inhaling the crisp brisk. Whatever it is he’s up to, he still has a hold of his Tumblr account, which he’ll update in spurts. With this classic cover of “At Your Best,” we are reminded of why we love Ocean. It’s smooth high falsetto swims carefully among strikingly, subtle piano keys. Reminding us that love is confusing to us all and not even Ocean has figured it out.

SKE48 – AKB48’s second sister group in Sakae, Nagoya – has a plethora of love songs under their belt. All of them are great, but if there’s one that stands out from the pack is the groups 2013 release “Escape.” Led by former member Mizuho Yamada, “Escape” features the SKE48 Senbatsu – or selection of usually most popular members – performing a fierce song about the only thing that really matters when starting a relationship – chemistry – and selfishly giving into it. “Escape” falls far from the typical sugary sweet bubblegum pop idol sound and dives into the realm of an electronic dance pop fusion masterpiece. Right from the start the cascading notes of the synthesizer and the mesmerizing chanting echoes of “take me, take me, away” will captivate the listener and make you want more.

3. Spooky Black (formerly known as Lil Spook) – “Without U”

A viral video gone classic, sure to be a hit for you and your significant other this Valentines. Released last February, it took awhile for people to catch on to the ghostly-Caucasian-durag-wearing 17-year-old Minnesota bred singer. With a combination of eerie trap music, he sings lush r&b with an unconventional concept. “Without U,” is a serenade anthem track to tell that special someone how you feel.

Korea’s unique brand of pop music has been growing in popularity since 2010 and is slowly reaching the point of global domination. The industry is known for spitting out groups left and right however, there are some groups who manage to break through and become amazing successes. 2PM is one of those cases. Their 2013 single “A.D.T.O.Y.” is a straight up sexy R&B influenced pop song about not being able to get your mind off of a certain special someone. “A.D.T.O.Y.” is also one of those rare K-pop songs where the English translation of the lyrics actually makes sense and flows really well together. Unlike other boy bands whose lyrics translate to something bizarre along the lines of “I’ll take you in one mouthful like cheese.”

The beat puppets in digital synth taps and adds a high energy orchestra-like hook with Jesse Ware racing along side the ensemble production. The J. Cole remix features Cole rapping as if he’s telling a story to this girl he just met and is enchanted by her, “Give me something I can feel, I can tell that you been through it all, don’t mean to offend you at all.” While Ware searches love in the middle ground with “kind of, sometimes, maybe,” the unsure routine that is contestant in new and old relationships.

Love isn’t easy, there’s bound to be some bumps, dips and curved roads ahead – especially when everyone’s not entirely supportive. Nothing quite captures that feeling then Selena’s 1994 chart topper “Amor Prohibido.” The song plays out like “Romeo and Juliet” with a tejano, cumbia and Latin pop influenced soundtrack. Instead of the two feuding families in fair Verona we have society vetoing a relationship based on socio-economic status. The song has been covered numerous times, most famously by Mexican songstress Thalía, and has become an anthem for the Latino LGBT community for its lyrics.

Sexy Kali Uchis with her unique 60’s funky-exotic-soul twist, the Columbian singer releases her new project “Por Vida.” Pulling inspiration from possible legend Amy Winehouse, Uchis displays a rich voice that takes you back in time in “Loner.” Dedicated for the lovers at heart bitter on this Valentine’s Day, with their head up high because they’re better off alone, “I don’t want to know ya, I don’t want to be known.” Uchis’ company can heal your wounds.

“Thin Line” – off of Macklemore and Ryan Lewis’ 2012 album “The Heist” – has Seattle based rappers Macklemore and Buffalo Madonna waxing poetic about a relationship falling apart at its seams. With lines that cut straight to the quick such as “…Let’s jump back into this snake pit, get bit, get out and jump back into the suffocation” and “she walks that thin line in and out of my bed, each time I love her less,” the song paints a ruthless and realistic picture of the struggle of trying to save a relationship all while coming to the realization that there’s nothing left worth saving. After all, no one said that love was all about sunshine, rainbows and happiness.

From The Keys’ most dynamic album entitled “Brothers.” “Never Gonna Give You Up,” is a vintage tale of the depths of emotional waves that love can weigh one down with. A story about triumph through sacrifice and faith, hope instilled in a way that there is no measurement to infiniteness love. A song embodying the will beyond odds that love is real thing—Dan Auerbach’s transforms the song into a rugged rendition of a Jerry Butler classic.

This is the 2014 international Japanese pop music version of the ‘90s classic “The Boy is Mine” – just way more realistic and a lot sassier. The lyrics revolve around J-pop darlings Miyuki Watanabe and Yuki Kashiwagi having a playful and witty spat over a guy both of whom are dating – all over an upbeat, mid-tempo horn-driven pop song. Kashiwagi plays the role of the longtime, loyal girlfriend perfectly as she sings about how long she and the unnamed boyfriend have known each other and how close their bond has gotten overtime. However, Watanabe doesn’t miss a beat and fires back with sassy comments comparing Kashiwagi’s relationship to rotting vegetables proclaiming, “Lettuce, stockings and girlfriends, the newer ones are always better.” The song ends with the girls realizing that the guy isn’t being fair and wants him to make up his mind. The moral of this story? Don’t be that person who messes around with people’s emotion and on the flip side, don’t be the person that puts up with that sort of thing.