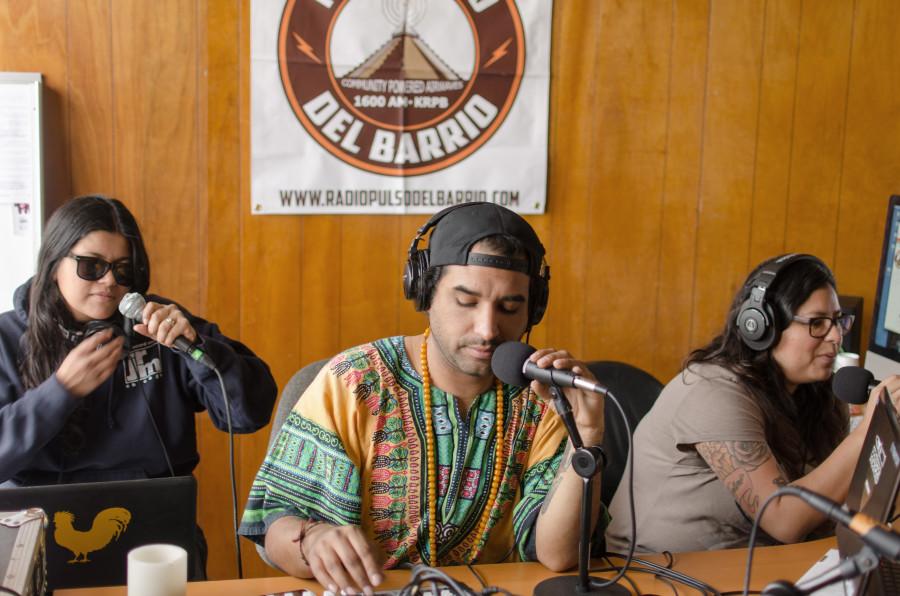 Nothing nourishes the drained body like a breakfast burrito after one of “those nights” of too many beers and shots. That greasy overload of carbs and fat brings anyone back to life after flushing your dignity down the bar’s porcelain life counselor. It’s simple comfort and warmth. It’s pure indulgence. That’s the kind of morning relief that the Breakfast Burrito Club radio show provides its loyal listeners.

The radio show starts off every weekday morning from 9 to 11 a.m. with no real script or agenda, simply dictated by humor and soul. Not everyone makes it to the show every morning but it’s always a full house with Bob’s charisma and his notorious guests. Bob Green and his impromptu co-host, David Veloz, aka “el Grinch,” are never timely, but always present. They never seize to provide a morning dosage of comedic relief. Bright and early, Breakfast Burrito Club becomes the energy that drives Radio Pulso del Barrio.

The greater Logan Heights community powers Radio Pulso del Barrio, a bilingual radio station that is centered on culture, arts and education. The station strives to give a stronger voice to the residents of the Barrio.

The San Diego Museum of Art’s Open Spaces Project, funded by the James Irvine Foundation, established the station after they received the opportunity to organize a self-sustaining public art piece that would empower the community. Four neighborhoods in San Diego, Barrio Logan being one of them, were chosen to design a public art piece for their community and from the community.

“We hired an artist-in-residence and that was Roberto Salas and then we hired a lead artist who is someone who lives in the neighborhood and his name is Misael Diaz and we three as a team facilitate the meetings … the dialogue was never radio to begin with. The dialogue was more like, we have this budget, what would you like to see in your community? Do want another mural? Do you want a sculpture, where would it be? With this group that we formed and met we got to decide medium, content and location,” explains Irma Aguayo, project coordinator of Open Spaces.

Bucky, now coordinating the project, explains how she got involved by attending the community forums that Open Spaces held to receive input from residents.

“I just started going to the community forums at the museum that Open Spaces was putting together to try to get input from the community as to what they wanted to do with the funding and then coming up with ideas of a public art piece,” she says. “I would just go to the meetings and participate and be in the conversation and hear everyone else’s ideas.”

She admits that when the grant writer first approached the community art galleries, such as The Spot, Voz Alta and Roots Factory to propose the project, there was hesitation from the residents because no one wanted the museum to be involved in the space they had created alone.

“Right away everybody was like, we don’t want the museum to get involved with the community because then the museum is just going to go ahead and stamp whatever they want and then call it a ‘community art piece,'” she says.

That hesitance quickly diminished when representatives from the art galleries were called upon to become the main voices of the project.

After a period of about six months, the multitude of ideas and proposals were narrowed down to three viable options. The proposals included the idea to activate vacant lots; a corridor dedicated to workers’ rights leader Cesar Chavez, and the concept of a community radio station.

After a voting process within the committee, Radio Pulso del Barrio was chosen as the proposal that would receive grant funding and support from the two foundations.

The foundations’ grant funded the radio equipment and space at Bread & Salt art gallery that would become Radio Pulso del Barrio. At that point, the museum handed down the project to the community and appointed a board where Bucky was voted president.

Roots Factory soon got on board with the project. As one of the oldest art collectives in Barrio Logan, it was well-connected with local artists and musicians who offered the critical creative component the radio needed in order to establish itself in the community.

“We’ve been around, we have a lot of connections with people who started these galleries. We’ve really developed these close relationships with a lot people and the artists who support them,” Bob comments on the establishment of the Roots Factory in the arts community in Barrio Logan.

No one on board at that moment had had previous radio experience; they just decided to “wing it” and go on air, explains Bucky. Instantly, educators and local social justice organizations such as Association of Raza Educators San Diego and Border Angels visited the radio station and supported the project.

“It’s not my project; it’s not Roots Factory’s project; it’s what the community wants,” Bucky asserts. It’s a self-sustainable project run by volunteers, people committed to the project wholeheartedly that follow the grassroots rhythm happening right now throughout Barrio Logan.

Radio Pulso del Barrio incorporates a wide array of topics and music on each show, all created by local artists, community activists, and musicians.

“The radio station is important because it encompasses everything else that happens. It is another platform of support for everyone. It’s a platform for a voice, it’s a platform to mobilize and unify people and I think those things are really important in communities,” Irma comments on the radio.

One particularly unique show is from a San Diego City College student Jessie Maria Gomez-Villeda, which aired for the first time on Feb. 21. Titled “Mi Vida Loca,” the show consists of a compilation of narratives told firsthand by people who want to voice out a story, feeling or experience. The stories contain a raw, unstructured and uncensored human component to them. The show airs without introduction or warning, and instantly delves the listener into the speaker’s mind and feelings, leaving listeners in constant anticipation of what the narrator will say next.

Jesse-Maria says she was inspired to create a platform for people to express themselves creatively and emotionally after taking a creative non-fiction writing class at City College with professor Nadia Mandilawi.

“It all tied back to how these experiences have defined us as people, as students, as writers, so there was a lot of impactful moments in that class,” Jesse-Maria says.“So when it was over it really dawned on me, like wow, from everything I’ve written and poured my heart into … everything else others had poured their hearts into, like there is only a small pocket of time for those moments to be shared and that was in that class. And that inspiration ended with that class, and then what happens?”

This influenced her to make use of the radio as a medium to give those stories continuity and keep them alive.

Jesse-Maria stands among other artists and community activists who have already, in just a few months, established Radio Pulso del Barrio as a true community radio station thanks to the group of strong supporters out there. Tune in daily online and immerse yourself in the Barrio culture at www.radiopulsodelbarrio.com.