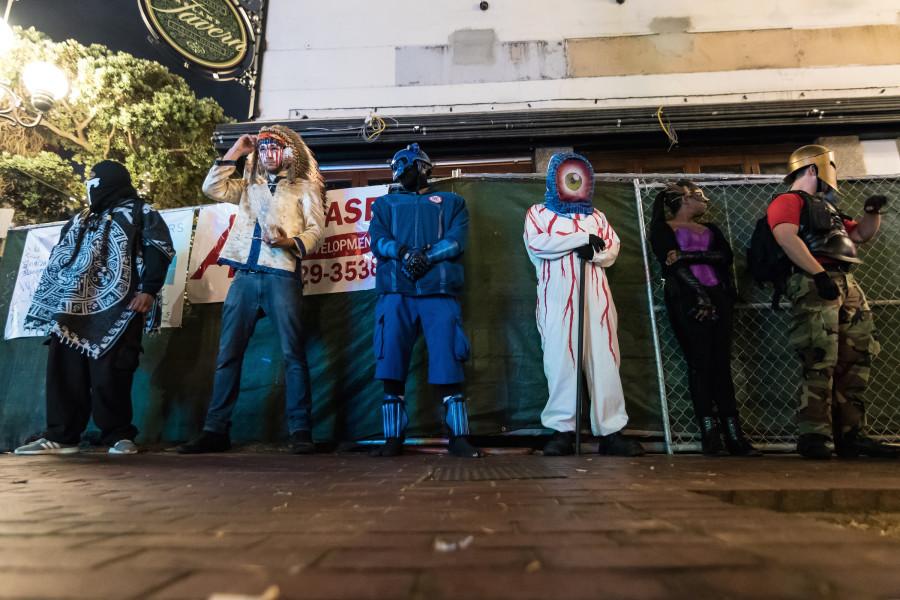 “Does that thing record video?” Spartan asks from the front seat looking at my camera.

“Well if someone gets stabbed can you record then?” he says.

“Yeah, if someone gets stabbed I’ll start recording.”

So begins a Saturday night on watch with the Xtreme Justice League.

The XJL is a group of what is known as real life super heroes. Regular people from all walks of life who dress up in costumes and create alter egos with names like Midnight Highwayman, Vigilante Spider, Spartan Warrior and Violet Valkyrie.

More than just cosplay, members of the XJL spend their time in the streets, patrolling Downtown on the weekends, as well as responding to specific threats around town in what their founder, Mr. Xtreme, calls campaigns.

The Suzuki SUV’s four-cylinder engine labors to get up to speed, carrying the team through the bustling city. Spartan Warrior is riding shotgun, with Light Fist in the back seat and Midnight Highwayman taking the wheel.

The night begins pretty slowly. Riding down Fourth, up Fifth and so on, pulling into dark parking lots, looking for signs of trouble. Spartan and Midnight shine bright flashlights down the rows of cars looking for broken glass or passed out drunks, as Light Fist peers out the open rear window doing the same. The most they run into in the parking lots is some teenagers pissing next to a car.

It’s around 11:30 p.m., and the streets outside are alive with activity. A group of women dressed in their Saturday worst walk through giant clouds of smoke blown by men at a hookah lounge. Pedicab drivers weave in and out of traffic, shuttling club hoppers from one spot to the next.

Inside the car, the vibe is upbeat.

“Remember that fight on Market? Where the guy threw the coffee pot?” Spartan and Midnight Highwayman help pass the time by telling stories of their past encounters.

Apparently, there had been a big brawl around Christmas time and someone had used their Christmas gift as a weapon in the fight. They all chuckle at the memory, and there is the strong sense of camaraderie between the men. Far from feeling like a job or a chore, they really enjoy the time they spend together. Forty-five minutes or so have passed, amounting to several circuits of their usual patrol route, without incident.

Riding down Broadway, the unit scans both sides of the street intently, but it’s Spartan who catches something from the passenger seat worth investigating.

Sitting upright against a planter, there is a man wearing a blue button-up and jeans with his head slumped forward against his chest.

Midnight quickly flips on his emergency flashers and pulls the SUV to the curb. In unison, they hop out of the car, taking positions around the unconscious man, Midnight holding the flashlight as Spartan attends to the man and Light Fist keeps an eye on their surroundings.

“Hey buddy, you all right?” Spartan asks and receives no reply in return. “Can you tell me your name?”

Still nothing. Spartan, a medic by trade, checks the unresponsive man’s heart rate.

“140. Call an ambulance,” he says, and within seconds Light Fist is on the phone with a dispatcher explaining the situation and giving them our location. They continue to try and talk to the man, but get nothing by the time the ambulance arrives. Spartan quickly updates the paramedics on the man’s condition and paramedics load him onto a stretcher and into the back of the ambulance.

Helping others is one of the largest motivating factors for members of the XJL, spending untold hours of their own time in the service of others. Some having devoted years to the cause, and in the case of Mr. Xtreme, a length of time that spans almost a decade.

“I’ve always wanted to make a difference. I’ve always wanted to stop violent crime because I was put off by all the apathy, and indifference, and all of the people getting victimized by violence,” he says. “It just seems like nobody cares. And I look around. This world is kinda getting bad, getting worse and worse, and all the evil that I see. I just want to get out and try to do something positive and really make a difference.”

The Suzuki continues to snake its way through the streets of Downtown. The rest of the ride is quiet, stopping only once more to give a homeless man some bottles of water. It’s around 1:30 a.m. when Mr. Xtreme calls to say he’s Downtown to begin his foot patrol.

The bread and butter of the XJL, foot patrol is a much different experience than the relatively safe and anonymous confines of a vehicle. The previous weekend, the team had taken some potential new members on one such patrol.

The tryouts arrive, all together in a blue sedan. Friends and bandmates who were out to make a difference, as well, they had decided to come see if the XJL was a fit for them.

Introducing themselves as Chief Diplomacy, dressed in a Native American headdress, oriental shirt and jeans, El Commandante, wearing a black and white serape and balaclava, and rounding out the lineup, The Third Eye, sporting white coveralls and mask painted to resemble an eyeball.

Once Grim and Violet Valkyrie arrive, the team goes over the plan for the night. Spartan is to lead the excursion and quickly forms the group into ranks.

“I want Chief Diplomacy and I up front. Violet, you and El Commandante in the center, and Grim and Third Eye will take the rear.”

They are very organized as they lay out the plan for the night, assigning each person a specific job. Phone talker, runner and medic are all assigned by the patrol leader before leaving the hall.

Walking in formation heading south on Broadway, the brightly colored conglomeration starts to make its way toward the Gaslamp Quarter. They post up at every red light, forming an outward facing circle to watch for any suspicious activity.

It’s 11 p.m. on a busy Saturday night but for now the streets are peaceful. Marching as a single unit, they travel up and down Fourth, Fifth and Sixth, singling up as they squeeze past lines of club goers and sign spinners hawking dollar tacos and pizza by the slice. This makes up the bulk of the night, taking a pit stop only once for a bathroom break at the trolley station.

Walking through crowds of people with six adults dressed in costume, you hear all kinds of things. The range of reactions received throughout the night covers the spectrum.

From groups of country girls outside of Moonshine Flats stopping them for pictures and hugs, to Guido men in half-buttoned shirts and gold chains outside of Parq looking just as much a pop culture caricature as anyone in the masked group, yelling aggressive taunts as they walked by — “Look at these tough guys! It’s not Comic-Con is it?”

Asked if the comments ever get to them: “If you’re going to get upset at that, this isn’t the job for you,” one of them replies.

Moving between Fifth and Sixth for another go-around, they spot a commotion. It’s hard to tell from where they’re at, but it’s obvious something is happening on the corner across the street.

They break into a sprint toward the action and arrive on the corner of Fifth and E to find a man that has clearly just been in a fight trying to break away from his companions and continue the scuffle.

De-escalation is the main goal of the XJL, and while Chief Diplomacy closes in on the man reminding him that it’s not worth it, Grim illuminates the corner with his helmet mounted flashlight. The rest of the group fans out and creates a barrier around the man, and his friends provide a presence and ensure nobody comes up for round two. Once the participants realize they’re surrounded by costumed crusaders, all they want to do is remove themselves from the situation as quickly as possible.

It’s impossible to say what would have happened if the XJL hadn’t been there at any of these incidents, but regardless of their alter egos and outfits, having a clear-headed and well-intentioned influence in often alcohol-fueled, out-of-control situations can make all the difference.

That’s what this is all about when you really get down to it. Between the choice of doing something and doing nothing, a handful of people have chosen to do something. Albeit in their own Spandex-y way, not only because it makes them feel good but also because it makes our city, America’s finest city, a better place.

For more information about the Xtreme Justice League, contact Mr. Xtreme at [email protected] or check out www.xtremejusticeleague.org.