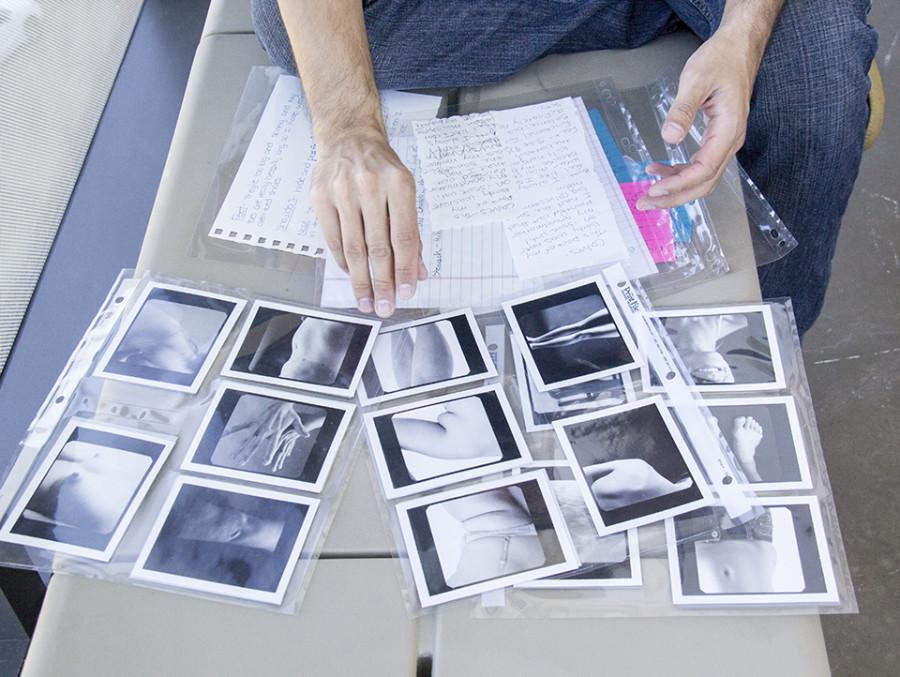 Michael Chao's samples of his upcoming project for the "Women in Light" art show exhibits the body parts that his models feel insecure about. Photo credit: Celia Jimenez

Photographer Michael Lee Chao has stumbled across a medium through which women can take their insecurities and project them in a positive way. With a single photograph, women can help erase all previously conceived notions of perfection and realize that everyone has flaws and yet there’s beauty to be found in those imperfections.

Chao’s “The Body Image Project” captures photographs of women’s body parts with a Polaroid camera. Each image highlighting what each subject considers an imperfection paired with a handwritten note from each subject describing the reason for said choice.

“These women have similar feelings – they don’t like this, don’t like that,” Chao said. “This is the beauty of the whole thing. Taking something they believe is ugly and make something beautiful out it.”

The project is meant to encourage women to find beauty in body parts they previously considered ugly or just felt insecure about. More than just abstract images, these series of photographs are meant to inspire.

“Women have body issues because of unrealistic beauty ideals that are forced upon us our entire lives,” said an anonymous participant of the “Body Image Project.” “We cover, cut and starve ourselves and feel we must constantly apologize for our shortcomings. I wanted to be involved in Mike’s project to confront my flaws head-on.”

For Chao, a New York native, this project comes as a sort of evolution from his journey as a photographer. Dwelling in fashion, wedding and event photography, “The Body Image Project” came about after he noticed that many of the models he worked with shared displeasure with their bodies.

“There was this theme, common thread throughout,” Chao said

Having an argument about ear sizes with a friend one afternoon and having a Polaroid camera available, Chao snapped his first photograph of what would become “The Body Image Project.” The camera would prove to be the perfect tool for him to capture the intimacy and honesty required for the project.

“It is really important to have them unedited, it has to come from somewhere genuine,” Chao said. “This is you, your body unedited. The way things really are.”

His use of Polaroid cameras on this project can be traced back to his love for analog equipment. More than just a choice based on trend, he describes his love for said equipment as going back to the roots. Enjoying the fact that one can’t rely on technology to fix it later.

“The beauty of the Polaroid, the reason I like it, is because you can’t edit the photograph,” Chao said. “One of a kind. Each picture is it’s own unique image. Can’t be reproduced.”

Currently, the project has more than 25 photographs with some photo shoots still pending before “The Body Image Project” is ready to be displayed, but Chao would love to photograph more subjects.

“I want to get as many women as possible,” Chao said. “It takes a lot of bravery. It’s hard to convince women to do it but the final result is something that will be beautiful.”

Chaos previous project, “Luminous Alchemy,” a light-painting-on-Polaroids project, won Best In Show in last semester’s annual student exhibition and is on display until November in the gallery.

“His work and work ethic are equally impressive. His portfolios, including this new series, are not simply beautiful to the eye but sensitive, evocative, thought provoking, and technically excellent,” San Diego City College photography professor Dave Eichinger said.

“The Body Image Project” will be part of the third annual “Women In Light” show in the Luxe Gallery on the fifth floor of the V building opening on Feb. 2, 2016. The show was previously only work by the women in the photography department, faculty and lab technicians. It has been expanded to include additional photographers who have work related to the theme.

For more information on how to be part of “The Body Image Project” and other projects, contact Michael Lee Chao through his website: www.michaelchaophoto.com.