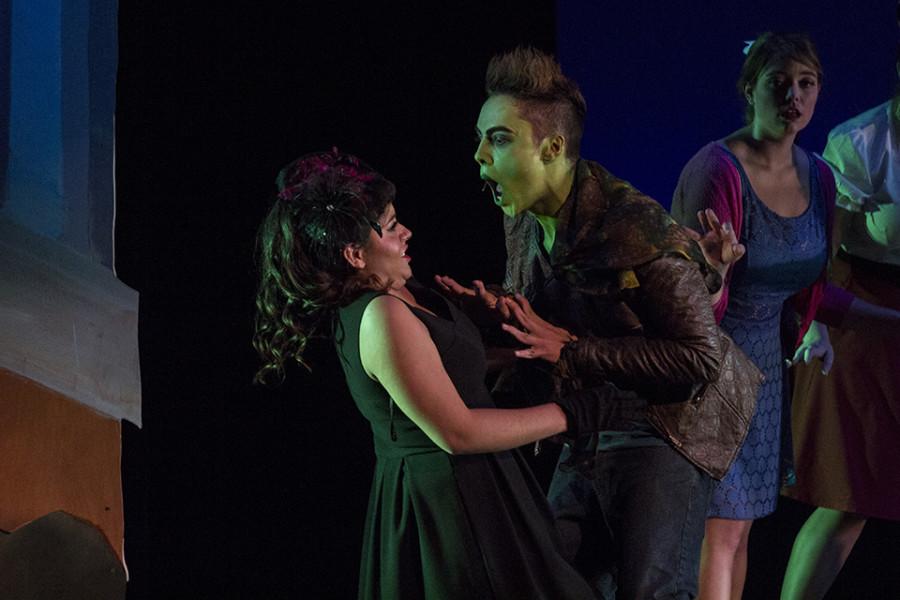 “Zombie Prom” was a huge success on its opening night on Oct. 30 just in time for Halloween. June E. Richards, Ashley Kobza and Alicia Rincon directed this comedic and interesting musical.

The prologue consisted of the main characters with the rest of the ensemble in a craftily made tableau with girls on stage left and boys on stage right. Miss Strict (played by Natalia Maggio) stayed true to her namesake and let everyone know who was the principal of Enrico Fermi High.

The set design was tastefully done and simple. There was a nice background to convey the image of a high school. A building was painted with 3-D realism, as if someone could walk into it. Michael Farley, music director for the theater department, kept up with Rincon’s fast choreography.

As the plot developed, so did the relationship between Toffee and Jonny. Toffee (played by Yasmin Ruiz) and Jonny (played by Aaron Lugo) had a high school romance like no other. Besides the typical good girl falling in love with the boy parents warn their daughters about, this couple had to deal with issues beyond the grave. Their principal, Miss Strict, was set on keeping these two apart as well as Toffee’s parents.

When Toffee’s parents found out the type of boy she was rendezvousing with, they immediately ordered her to end their windswept love. Toffee, in anger and feeling an obligation to her parents, broke all ties with Jonny which led to his premature demise. A demise so unplanned he became a part of the walking dead.

Jonny, so distraught about the not-so-everlasting love with Toffee coming to an end, was doused in chemical waste from a nuclear plant. His body was dumped unceremoniously into the ocean and from his watery grave, he heard the voice of the one responsible for his ending. That is where all the problems for Toffee and Jonny truly began.

Nelson Monroig plays Eddie, who he refers to asa a “sleazy but charming news reporter,” who jumps at the chance for headline breaking news of a zombie wanting to go back and graduate high school.

Jonny met several obstacles as he tried to win back Toffee and hoped to be given the chance to attend school with his still living classmates.

Miss Strict was the number one obstacle in hopes of Jonny being able to go back to school, but with the help of Eddie and the rest of Enrico Fermi High, Miss Strict was won over.

Even though it was a morbid situation there were moments of comedic relief involved while dealing with the corpse. Prom, one of the most important events for the high school, was threatened to be cancelled if the zombie decided to attend.

Many elements contributed to this production being a success. The sultry and cool sound of the guitar and the rest of the musical ensemble brought life to the music underscored in the production. The chemistry between the main characters went beyond the unmistakably green paint on Lugo’s face to keep in character as a zombie.

Eddie and Miss Strict had a few musical numbers that kept the audience’s attention and added spice to their already sizzling chemistry. The ensemble kept the scenes tight and clean leaving no space of the stage open to awkward spacing. It was a well put together production overall.

“Zombie Prom” will have showings every Friday, Saturday and Sunday until Nov. 15. Tickets are $10.