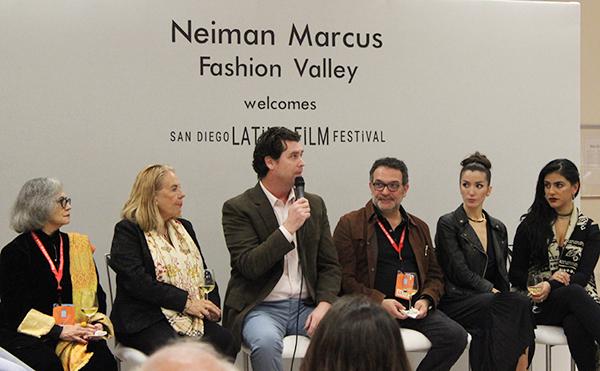 Chris Cashman (center) talks about the documentary "Club Frontera" that tells the story of Xolos de Tijuana and their journey to become a first division team of the Mexican soccer league. Photo Credit: Ricardo Soltero

The 23rd annual San Diego Latino Film Festival kicked off its 10-day run with ith a press conference featuring casts, directors and producers of films screening at this year’s event.

San Diego City Times was able to speak before their press conference with the director of “Club Frontera,” Chris Cashman, as well as Alejandro Guido, a midfielder for Club Tijuana and the U.S. national team.

The documentary follows the rise of Club Tijuana Xoloitzcuintles during their promotion to Mexico’s premier soccer league, Primera División, and their unlikely championship run. The film shows the positive impact the emerging success of los “Xolos” had during a time when the Tijuana was marred by drug trafficking and violence.

“I think this documentary will demonstrate the impact the team had in the city and how beautiful the sport of soccer is,” said Guido in Spanish.

“I believe that it will help remove the stigma that the city (Tijuana) had. It will totally change people’s perspective.”

San Diego film director Cashman details the growth of the city and the benefits that came from having a professional soccer team. Through players like Guido, fans, political figures, sports personalities and enthusiasts, “Club Frontera” paints a picture of city coming together.

“The team did so well, so fast and now they’re getting international recognition. You couldn’t have asked for a better story.”

The 2012 championship season in Mexico’s Primera División challenged Tijuana’s reputation of violence and corruption, giving Tijuana a collective identity that the city had long struggled to obtain.

“This is the first time Tijuana has had a first-level, first-division team. Being a city of almost 2 million people, that is unheard of in Mexico and honestly now people can root for the team in their back yard. (They) no longer have to support teams that are thousands of miles away. Tijuana is a real city, with culture and identity and the people of Tijuana needed that,” said Cashman.

The documentary is part of this year’s Frontera Filmmakers Showcase, celebrating cinematic accomplishments of San Diego and Tijuana filmmakers. “Club Frontera” will screen on March 14, 17 and 20 at AMC Fashion Valley 18 during this year’s San Diego Latino Film Festival.