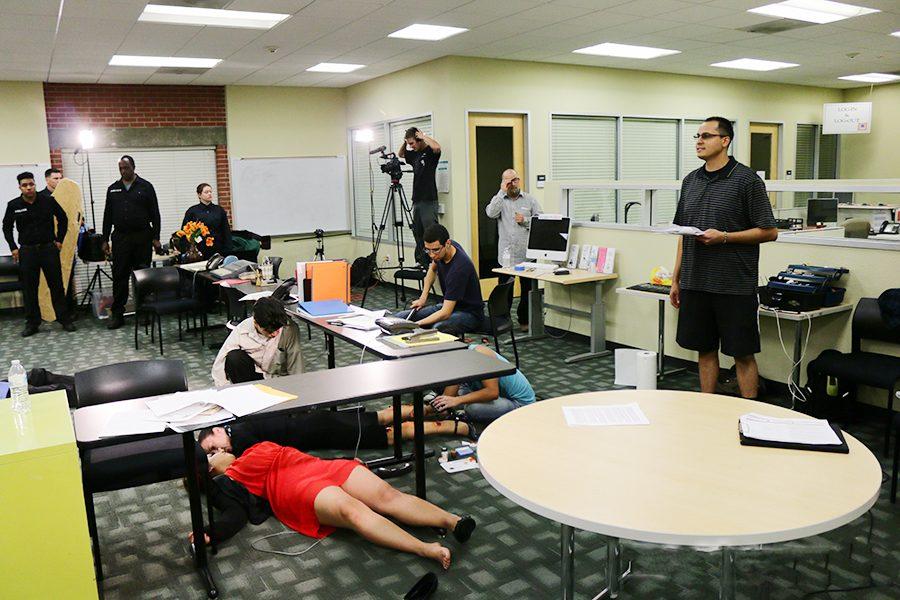 A reenactment of a mass shooting was filmed at City the L and C buildings, where film student Andrew Jimenez was making a documentary about the real-life crime in 1993 in Oxnard that left three people dead.His mother was one of the people to survive the shooting.Courtesy photo Andrew Jimenez

A documentary by a San Diego City College student filmmaker explores the event in which a man opened fire inside an Employment Development Department office in Central California in 1993.

“The Oxnard EDD Shooting Massacre,” directed by Andrew Jimenez, follows up with the survivors of the shooting, piecing together the events of that fateful day through interviews, newspaper, magazine and TV news stories and photos.

Jimenez’s interest in the crime can be traced back to his mother, who was an EDD employee and a survivor of the shooting.

“The gun was pointed at her at point-blank range, and it jammed. Ran out of bullets. He ended up killing my mom’s co-worker instead that day. Right next to her,” said Jimenez.

“If things had gone different that day, you know, my mom, she may not be alive right now.”

The shooting captured national headlines at the time. Alan Winterbourne entered the unemployment office on Dec. 2, 1993 and opened fire at state employees, killing three and wounding several others. He was killed outside the office in a shootout with police.

Jimenez said he’s making the documentary to honor those who lost their lives and the survivors. He makes it clear he’s not trying to sensationalize the crime.

“It’s all revolving around the survivors. I don’t want this to be anything to glorify the shooter, the murderer,” said Jimenez.

What began as a regular student film project turned into something bigger. Jimenez received a lot of support from the survivors and from former Oxnard policemen. He was able to obtain the original 911 tapes, photos and more.

“For a student film, it’s huge,” said assistant producer Nick Mitchell. “There’s been a lot of outreach from the community who wants to know what Andrew is doing with this project.”

Professor Bob Sly, who teaches video production, is impressed by the scope of the effort.

“This is the biggest project I can remember in my class, and the entire school since I’ve been here. It’s an extremely ambitious project for one semester,” Sly said.

Besides the interviews with survivors and former police officers, the documentary features reenactment scenes. Filming has taken place throughout San Diego County, with a few stand-ups being done at the original locations in Oxnard and Ventura.

City College was one location used in the documentary. Thanks to the cooperation of the head of the Tutoring Department, Lance Soukhaseum, Jimenez was able to secure a location to film reenactment scenes in two classrooms in the C and L Buildings.

The project was financed by Jimenez, collaborators and family members, choosing to forgo the fundraising route. He used resources available to him at the film department, and classmates and actors donated their time.

“There are a lot of people who helped him,” said Sly. “The actors committed to the project. It was all the students who worked with him as camera operators, sound people, and lighting people, my department and our school that made it possible.”

Filming for the documentary will continue for a few more months. The working release date is Dec. 2, the anniversary of the shooting.

Jimenez plans to enter the documentary in film festivals as well as to make it available on Netflix, Public Broadcasting Service and local movie theaters.

For more information on the film and release date visit “The Oxnard EDD Shooting Massacre” official Facebook page at www.facebook.com/TheOxnardEddShootingMassacre