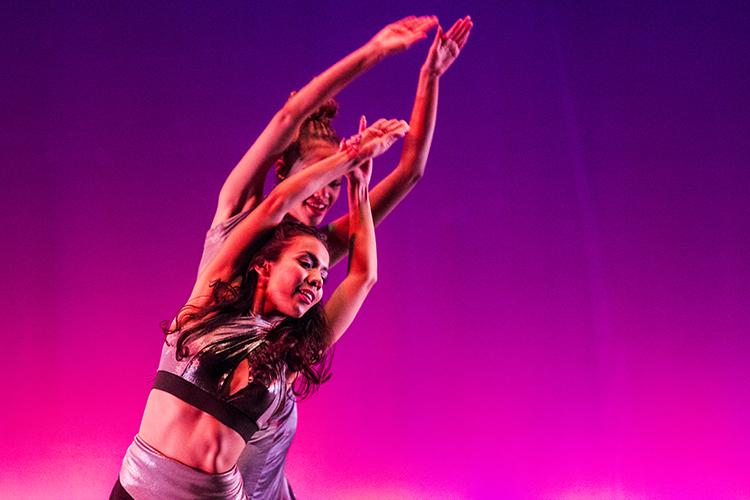 Priscilla M. Valencia and Anahy Barragan dance in "Blue Dream" on Nov. 17 during the dress rehearsal of "City Moves" at the Saville Theatre at San Diego City College.

“City Moves” is one of the best dance recitals the City College has staged in the last three years.

The show opens Friday night, Nov. 18, at the Saville Theatre and concludes the next day.

The recital is a roller coster of music and emotions. There is happiness, tragedy, misery, and so on, brought to life using traditional music genres used each semester, such as modern, jazz and hip-hop.

“Dangerous Women” is a sassy dance choreographed by Fernando Ruiz, a student. He said it was about “women empowerment” but it goes beyond that. Four dancers perform this dance and each of them has different physical features and all own the feeling of being a woman and being sexy.

“Cirque of Asylum,” choreographed by Alexa Lopez, is different from the other dances. This performance is presented as a mini-story of a curious girl getting into a creepy atmosphere. It has the most radical musical changes of all the pieces and they work well together.

“Reimagined,” from instructor Grace Shinhae Jun, is a two-act dance. Each act is the reverse of the other one.

“Reimagined Part One,” drags the audience into the struggle people of color face on a regular basis. The dancers wear Black Lives Matter t-shirts and it’s performed on a semi-dark stage, showing the fallen, the tragedy and the feeling behind it.

The second part is presented in a joyful, brighter environment. It almost feels like the action takes place in a dance club, with bright lights on the side, with people having fun. They are still wearing the BLM t-shirts but the message of the dance is different. It shows that there is another side; that there is still hope and good vibes.

“City Moves” will be presented by City’s Visual and Performing Arts Department at the Saville Theatre, 15th and C Street, on Nov. 18, at 8.p.m. and Nov.19 at 2 p.m. and 8 p.m. Tickets are $10 dollars, cash only, and parking is available next to the theater.