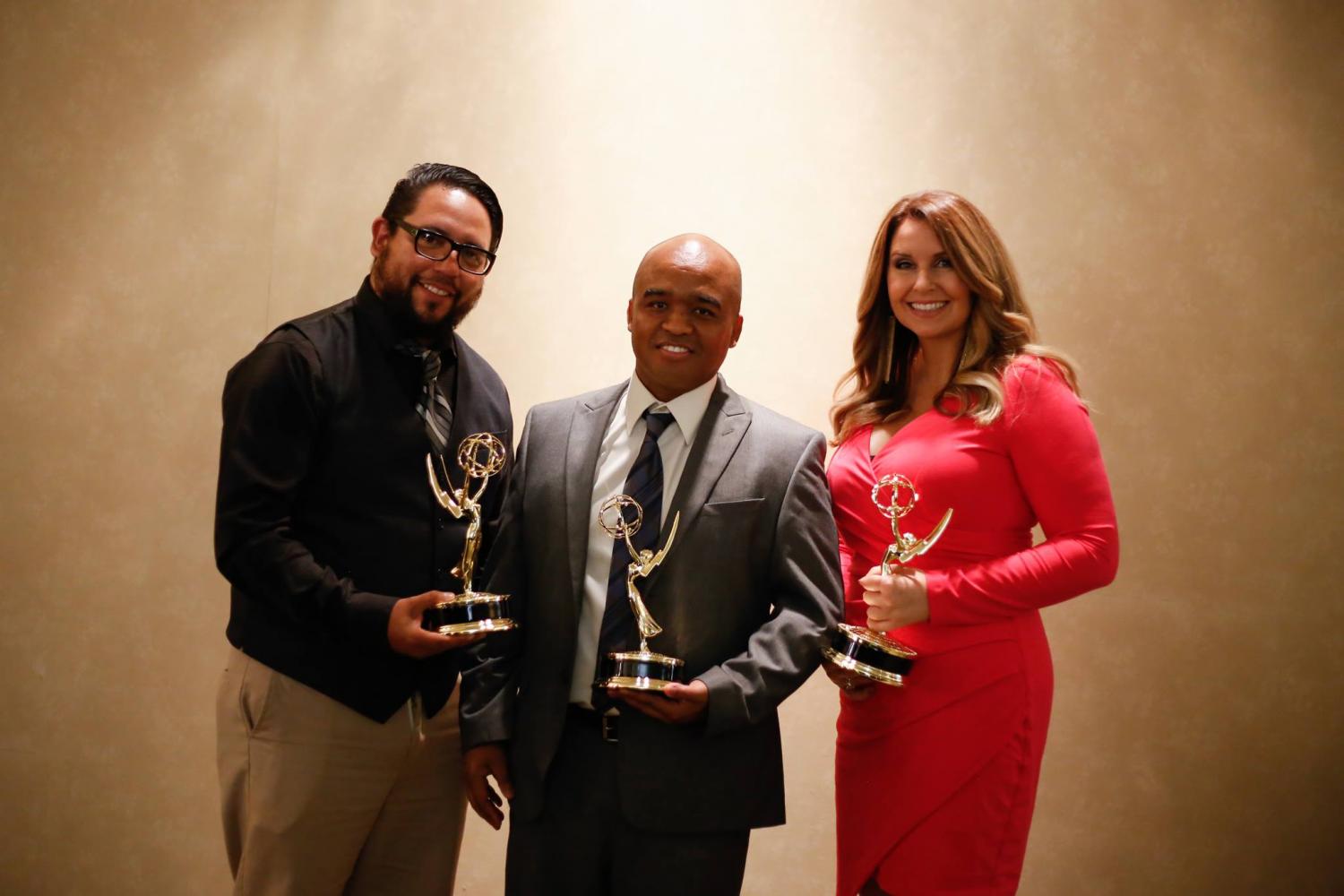 “It’s a peculiar feeling to win,” Brooks said, “just before we won our first Emmy of the night I was telling myself that ‘I would be satisfied with a single statuette.’”

He said that the gold and black-based statues weigh about two pounds and measure almost 14″ in height.

“I won awards for my photography,” Tamayo said, “I worked with Sharon Heilbrunn and David Brooks on a sports story on Malcom Floyd, [the] retired Chargers’ player.”

The 10 minute video, called “That’s So Malcom,” is about the (12-year NFL veteran) wide-receiver’s experience playing with the former San Diego team. His teammates Philip Rivers and Antonio Gates made a cameo appearance and spoke about Malcom too.

“The three of us have worked together on several video stories,” Brooks said, “so it was nice to win as a team.”

The video was showcased on the San Diego Union Tribune website. Tamayo still works at the newspaper as a photojournalist. Brooks also worked there for about 12 years as a photojournalist, but has recently transferred to the San Diego Community College District to work as a multimedia specialist. The two visited the campus last year as guest speakers for a couple of classes.

“As a student at City (between 1992-1999), I was able to see different cultural events and those experiences opened my horizon,” Tamayo said.

Brooks also attended City in 1992 when he was 18 years old, but never met Tamayo (not until they worked together at the UT). “I enjoyed my time at City College,” he said. “I flourished in the photography department and being downtown really fed my curiosity and desire to explore the city around me looking for interesting things to photograph.”

Tamayo also won a Journalistic Enterprise award with Brooks and eight others from the newspaper, for producing several stories last year.

“I [also] won an Emmy for video editing on a series of stories on Pearl Harbor survivors called ‘Keeping Pearl Harbor Memories Alive,’” Brooks said, “several people were involved with this series.”

Brooks’s fourth Emmy was for a video story on a local group of circus performers called “Circus Collective,” which he produced, shot and edited. “It was just one of those opportunities where you meet the right people and they allow you into their lives, access is the key to a good story,” he said.

The two were accompanied by their wives, Zoe Brooks and Raquel Meneses; both who (along with their families) they attained much of their gratitude toward. They were also thankful to many of their fellow-staff and supervisors at the newspaper.

Many of the journalism and photography students on campus were inspired by the two and wonder how they can achieve such success.

“If you want to work in journalism you need to start with small school papers, create a portfolio, build a website, and YouTube and Vimeo accounts,” Tamayo suggested. “You will need a place to archive your work.”

Brooks said “Learn how to shoot and edit video; the more you know, the more valuable you are to a company.”