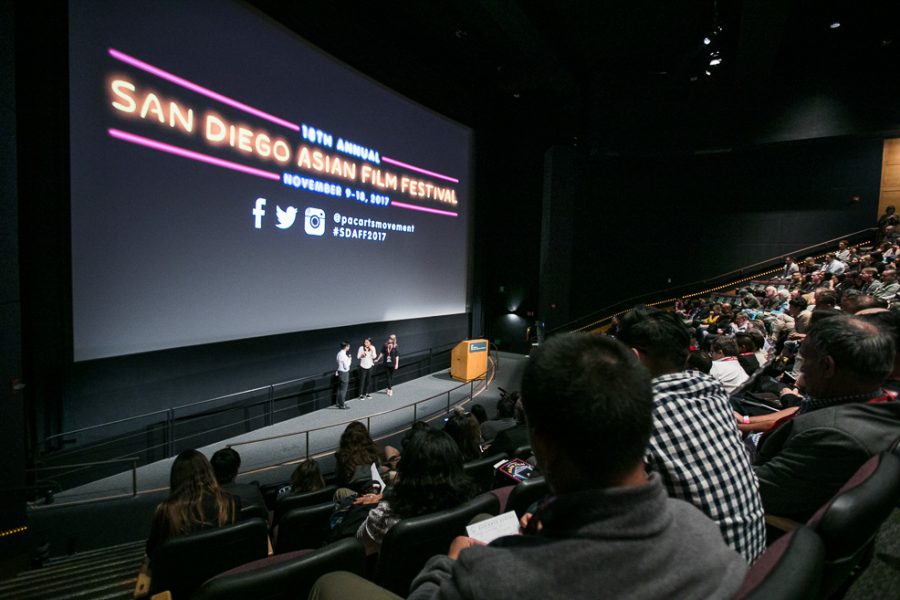 The festival, a major undertaking with over 160 films being shown at a half dozen locations throughout San Diego County, will run from Nov. 8-17.

The television, film and new media professor described the festival itself, its mission, the challenges involved in running an event of its scope and scale.

He also showed trailers for a handful of the films available for viewing over the course of the nine-day event.

The San Diego Asian Film Festival is in its 19th consecutive year of exhibition. The annual nonprofit event has a simple mission: to expand the legacy of Asian cinema.

“The mission manifests itself in a few ways during the festival,” Hu said.

An important step in broadening the legacy of Asian film in a Western market is the idea of representation.

“… Getting Asian faces on screen,” Hu said. “… Getting that representation for young Asian-Americans to want to act, or maybe make a film, or start directing themselves.

“That representation is important.”

The films shown were selected based on a range of criteria that has not changed since the inception of the festival.

However, Hu went on to describe how bending the rules in order to achieve the festival’s mission is as important as those rules themselves, like with the odd case of a non-Asian director or producer of a largely Asian film.

Of the more than 160 films being shown at the event this year, several of them will have the actors or filmmakers in attendance, giving moviegoers the rare opportunity to interact with those individuals directly.

Hu went on to describe the challenges in putting on an event like this. Offering films as premieres was one challenge.

In order to avoid piracy, many films originally from Asia are released on the same day in both the United States and their home nation.

In a few cases, such as “How Long Will I Love You” and “One Cut of the Dead,” films are billed as San Diego premieres, which adequately solves the issue.

Hu also outlined the challenge of bringing people into theaters and the matter of theatres available to host the films.

“Bringing people out to see a film is getting harder with the rise of Netflix and Hulu,” Hu said. “So we’re trying to bring in movies that people might not be able to watch at home.

“We’re trying something new, using (virtual reality) technology for movies like ‘The Train Hamasen’ or ‘Your Spiritual Temple Sucks.’”

A few of the films have practical problems, whether with length, equipment or content.

“Dead Souls” is a nearly nine-hour documentary about political prisons during the early years of Mao Zedong’s control of the Communist Party in China.

The virtual reality films have practical considerations regarding training for the use of equipment required for viewing.

Shorter run times also present issues in how to package the shows together in a way that financially makes sense.

The San Diego Asian Film Festival promises to be an interesting cultural event.

Showtimes, locations, pricing and further information can be found on sdaff.org.