Vanessa Tirado is enrolled full-time at UCSD and City College to be eligible to play softball. 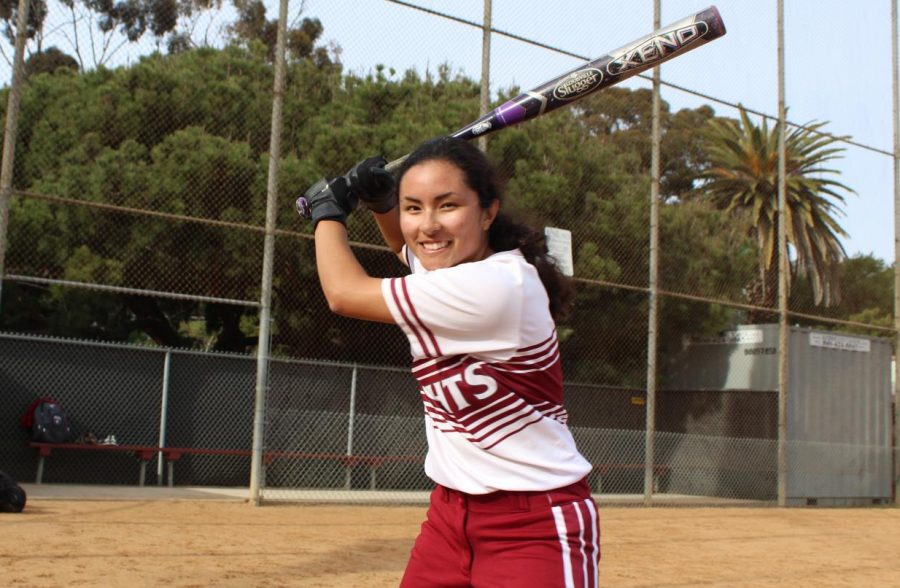 Vanessa Tirado could not stay away from softball. By Jonny Rico/City Times

This story originally appeared in the spring 2019 edition of the Legend magazine.

Vanessa Tirado is more student than athlete. That isn’t a knock on her ability. In fact, Tirado has been instrumental in the San Diego City College softball team’s surprising turn around this season.

But Tirado is different than her teammates and most other student-athletes at City College. Unlike her teammates, who may make their way to Betty Hock Field across the street from campus, Tirado does so from the UC San Diego campus in La Jolla, where she attends classes full time.

Her decision to attend both schools simultaneously is a rare one, but not unheard of. Teammate and longtime friend Alyssa Gonzales did so last season, splitting her studies between SDSU and City College before deciding to attend City exclusively.

Similarly, while she was a student-athlete on the badminton team during the 2013 and 2014 seasons, badminton coach Darby Duprat attended UCSD full time.

“It was very stressful,” recalled Duprat.

UCSD is on a 10-week quarter system as opposed to the 16-week semester system used at City College, which caused scheduling conflicts between Duprat’s sport and her studies.

“My finals (happened) when we had state championships both years, so I was really stressed,” she said.

The added stressors did little to keep her away from the sport, however.

“I really enjoyed badminton, so I still played,” Duprat said.

Tirado was so sure she was done with sports, that it did not factor into her choice of university at all after she graduated from high school.

“I picked UCSD for the education,” the biology major added. “I could have gone to another school for softball but I chose UCSD because that was the best education that was available to me.”

A year spent away from softball did not take away Tirado’s desire to compete.

“I ended up being really bored … It’s been a part of my life, all my life,” the shortstop said. So last year without it, I was just bored. I didn’t know what to do with my extra time.”

Extra time is no longer a problem for Tirado. Being a Knight requires her to maintain a full course load at City College, which she does through her sport and online classes. These units, combined with her courses at UCSD, put her at 25 total units for the semester.

None of the classes she is taking at City College will count toward her degree. She’s already completed most of her general education classes.

Staying on top of her education and sports, while trying to maintain a high grade point average, takes its toll on her social life at times. She remembers nights with little sleep after returning late with the team and having to study for classes the next day.

The fatigue does not show in her play. She is an impact player on a team full of them.

Tirado is tied with teammate Sabrina Figueroa for second most stolen bases in the Pacific Coast Athletic Conference. Knights catcher Carley Grant is the only player in the conference with more.

The California Community College Athletic Association named Tirado co-player of the week last month when she went 8-for-11 at the plate with an OBP of .786 over three games. She also scored seven runs over that span.

She has maintained a batting average over .400 for most of the season.
Tirado partially credits sports for keeping her out of trouble while she was growing up in Stockton, which was listed No. 10 in USA Today’s list of the most dangerous cities in the United States.

Her parents, Albert Tirado, an educator, and Brenda Estacio, a senior data analyst, were both high school athletes, playing baseball and soccer respectively.

Vanessa Tirado played shortstop and second base for St. Mary’s High School, a Catholic institution, and is one of three former St. Mary’s students on the Knights’ roster.

Sisters Alyssa and Alexis Gonzalez are two of Tirado’s teammates and hometown friends. They were a major influence in her decision to play for City College specifically.

“Their family takes care of me,” Tirado said. “When I was down here last year, kind of by myself … I wanted to get off campus and do stuff. I missed softball so I used to come out and hang out with them and watch their games.”

She first attempted to jump back in to the sport at UCSD. Tirado asked the softball coaching staff at the university about walking on to the team, but was only offered a role as a pinch runner.

Additionally, Tirado said coaches there would not allow her to try out for a position at all.  She declined, opting to look for a team that could offer her more playing time.

Juggling obligations at two schools has its disadvantages for the team. Tirado missed her team’s March 12 contest against Riverside Community College in order to take a final exam.

Head coach LeeAnn Taylor is happy to have her on the roster, even if it sometimes causes predicaments like this.

“They are student–athletes,” Taylor said. “If they need to take a test, I get it.”

There is uncertainty in regards to Tirado’s future both on and off the field. It remains to be seen whether she and the rest of the Knights can maintain their high level of play and make a playoff appearance for the first time since 2008.

Leaving San Diego completely may be in the cards for her future. Most recently the coaching staff of Harvard has been in contact with her and has requested more information from her for a potential transfer. She has also applied to other Ivy League schools and UCLA, which was her first choice after high school.

A change in her major may also be in order now that her career plans have changed.

“Originally I wanted to go to med school, but I thought about it and my dad is a teacher and my auntie is actually a superintendent of schools,” she said. “I’ve always been around the classroom volunteering.”

Most recently, Tirado volunteered at the Preuss School, a grades 6-12 college preparatory school partnered with UCSD. It is designed to assist potential first generation college students.

“For seven months I tutored a literacy enrichment class and I really liked it,” said Tirad, who is considering changing her major to history.. “I think I want to go into education.”

The only certainty in the next chapter of Tirado’s atypical college career is that it will happen away from City College. But for now, she is happy to be where she is.

“I’m just glad I got the opportunity to play this year,” she said.