A father follows in his son's footsteps to the City College drama stage. 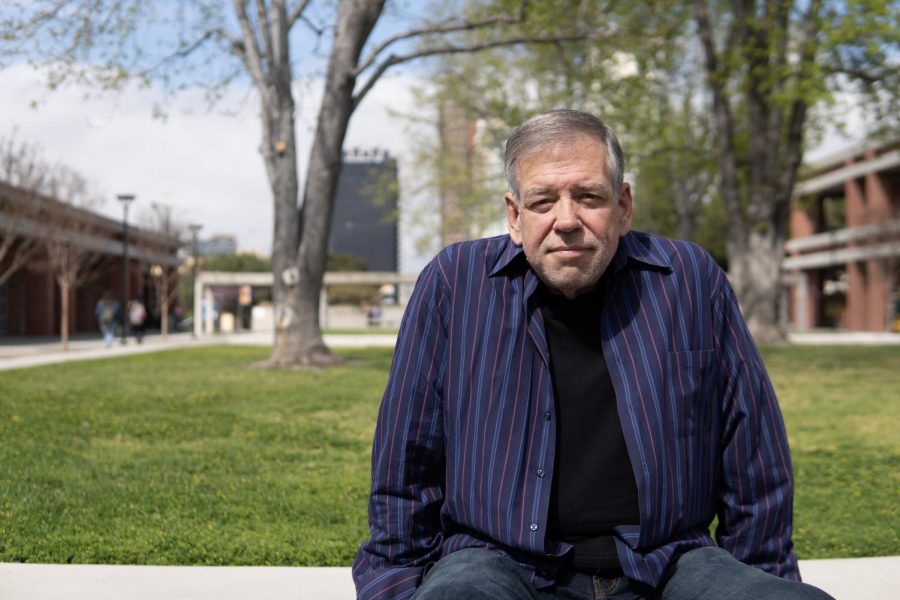 Gary Tallaksen enrolled to be a City College student in the drama department as a way to deal with the loneliness from his son's out-of-state move. By David Ahumada/City Times

This story originally appeared in the spring 2019 edition of the Legend magazine.

The stage has become the family business for the Tallaksen family. But this endeavor did not follow the traditional father-to-son route.

Instead, it was the son, William Tallaksen, who inspired and passed along the love of the craft to his father, Gary Tallaksen.

William Tallaksen is a former San Diego City College drama student who now lives in Oregon. Before he left, he issued an impactful challenge to his dad, who he believed was capable of being a part of the drama program, too.

“I dare you to do it,” William Tallaksen told his father after his final performance at City College.

Gary Tallaksen was hesitant at first.

But after his son moved out-of-state, the loneliness of not having his son near him drove Gary Tallaksen to City College to enroll as a student.

“Everywhere I looked (I thought) ‘William was in this theater, William did this play’ and it just got me excited to do more and more.

“I did it to try and impress him.”

Coming back to school helped Gary Tallaksen in unexpected ways.

He started classes and wanted to learn as much as possible but never thought of getting on stage when he weighed about 400 pounds.

Gary Tallaksen also suffered a TIA, also known as a mini stroke, due to his weight.

According to U.S. National Library of Medicine, “a transient ischemic attack (TIA) is a stroke that lasts only a few minutes. It happens when the blood supply to part of the brain is briefly blocked.”

The TIA served as a wake-up call for Gary Tallaksen, who was now inspired to turn his life around. He lost over 150 pounds, which he credits to walking all over the City College campus.

Now back in school, Gary Tallaksen is doing something he enjoys, although he never thought he’d be a performer. The closest he ever got was a radio DJ job.

“I worked at an AM radio station working midnight to 6 a.m. for a short time,” he said. “I was intrigued by that, so when I came to California I got into the Columbia School of Broadcasting (but) when I found out how much it was going to cost, I stopped.”

June Richards, the former drama director at City College when William Tallaksen was a student, has had the opportunity to see the elder Tallaksen perform on stage.

“It meant so much to see you on stage and to have time with William,” wrote Richards to Gary Tallaksen in an email after having seen one of his plays.

William Tallaksen drove to San Diego from Oregon, picking up his former professor along the way to come see his dad perform at the Seville Theater.

“It was an extraordinary gift for me to be welcomed back to San Diego by WILLIAM MY STUDENT,” wrote Richards to Gary Tallaksen in another email.

In his time at City College, Gary Tallaksen has participated in two New Play Festivals in addition to playing King Midas in last semester’s production of Metamorphosis.

According to Gary Tallaksen, one of the biggest obstacles he has found is memorizing his lines. He thinks it might be due to the TIA he suffered, but current City College drama director Katherine Rodda said it is normal for some students to struggle in that aspect.

“Like most people, learning lines can be a challenge,” Rodda said. “For some it comes easier than for others (but) he knows the work that he has to put into it.”

And it is the work ethic that Gary Tallaksen brings which shines to the rest of the cast members in the productions he takes part in.

“He is a very dedicated man,” said Vanessa Flores, who played his daughter in Metamorphosis. “He puts a lot of thought into what he does. He puts in a lot of time running over his lines outside of the theater.”

Flores also pointed out the time that Gary Tallaksen puts into looking for feedback from the shows directors and from the drama professors. He seeks advice and ways in which he can better himself and his performance.

Gary Tallaksen’s time on the City College stage might be coming to an end soon as there is a limit to how many times a student can sign up for the drama production classes. He is now mentally preparing to take the more general college classes like math and English in order to complete his associate degree.

One aspect of college life that Gary was not able to avoid is the social media insecurity.

“There’s still something lacking there,” he said. “Maybe it’s a Facebook thing, cause I’m on Facebook all the time and post all my pictures from the shows. (But his son) he never gets on and likes anything on my page.

“And as a dad, from my son who was an actor, I’d like (that recognition).”