A lot has changed in Washington for the past 10 years. 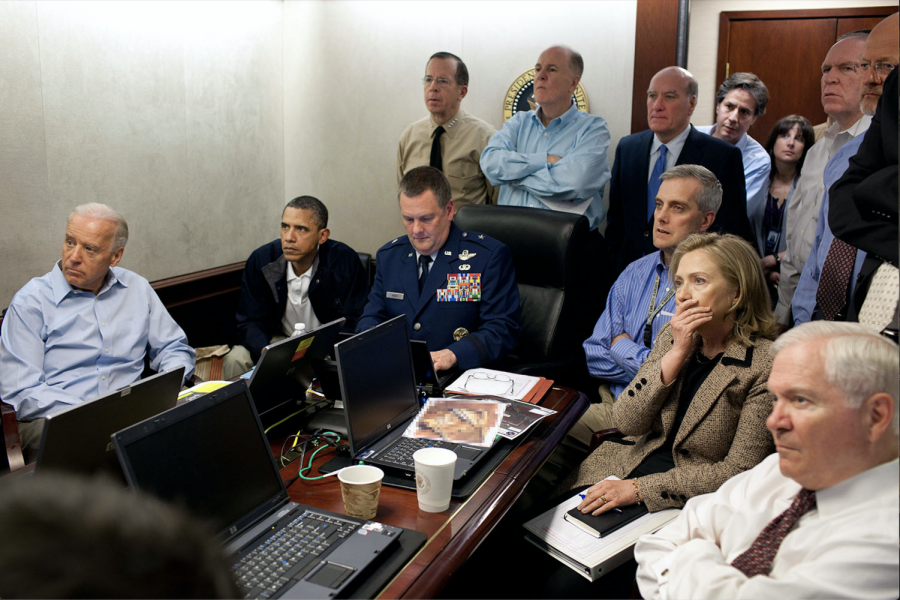 President Barack Obama and Vice President Joe Biden, along with members of the national security team, receive an update on the mission against Osama bin Laden in the Situation Room of the White House, May 1, 2011. Seated, from left, are: Brigadier General Marshall B. “Brad” Webb, Assistant Commanding General, Joint Special Operations Command; Deputy National Security Advisor Denis McDonough; Secretary of State Hillary Rodham Clinton; and Secretary of Defense Robert Gates. Standing, from left, are: Admiral Mike Mullen, Chairman of the Joint Chiefs of Staff; National Security Advisor Tom Donilon; Chief of Staff Bill Daley; Tony Blinken, National Security Advisor to the Vice President; Audrey Tomason Director for Counterterrorism; John Brennan, Assistant to the President for Homeland Security and Counterterrorism; and Director of National Intelligence James Clapper. Please note: a classified document seen in this photograph has been obscured. (Official White House Photo by Pete Souza) This official White House photograph is being made available only for publication by news organizations and/or for personal use printing by the subject(s) of the photograph. The photograph may not be manipulated in any way and may not be used in commercial or political materials, advertisements, emails, products, promotions that in any way suggests approval or endorsement of the President, the First Family, or the White House.

The 2010’s was a decade of progress. From the end of “don’t ask don’t tell”, to youth around the world protesting for climate action, the decade was characterized by breakthroughs. The decade might be over, but there is more to go.

Let’s step back and take a look at what made the 2010’s so great in politics:
2010 – Healthcare and Reconciliation Act
During this year, Congress passed the Healthcare and Reconciliation Act of 2010.
2011 – Osama Bin Laden Killed
Osama Bin Laden was shot and killed in a raid by the US.
2012 – President Obama Re-elected
Former President Barack Obama was re-elected in the 57th US election.
2013 – The NSA Leaks and Chelsea Manning Trials.
Chelsea Manning admitted sending secret military documents from wars in Afghanistan and Iraq to WikiLeaks.  She was sentences to 35 years in prison, but her sentenced was commuted in 2017 by President Barack Obama. She is currently in jail.
2014 – GOP Wins Majority
The GOP won 247 seats in the House, giving the party their largest majority in 83 years.
2015 – Same Sex Marriage
Same-sex marriage became legal in all 50 states.
2016 – Donald Trump wins presidential election.
Donald Trump was inaugurated as the President of The United States.
2017 – The Paris Agreement
President Trump announced his intent to withdraw from the Paris Agreement on climate control.
2018 – Family Separation Policy
Trump administration enacted the migrant family separation policy
2019 –  Trump Impeachment Process Began
Speaker Nancy Pelosi announced in September that the House would initiate a formal impeachment inquiry against President Trump.

What was the biggest moment of the decade? Send us a tweet with #CTDecadeReview

Check out the decade review in social media.