The San Diego City Times and Newscene staff will be updating this article throughout the evening. 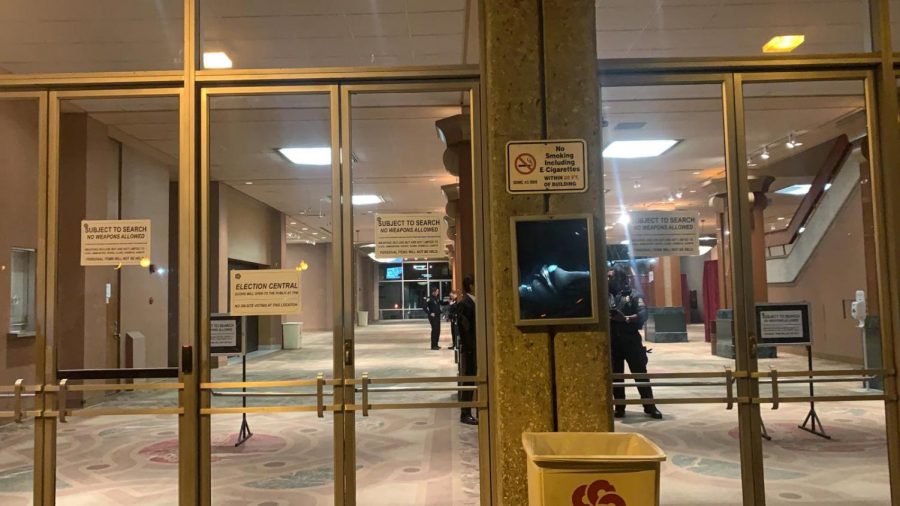 Doors are now opened for the public at Golden Hall in Downtown San Diego. Photo by Jesus Lopez/Newscene

Editor’s note: A correction has been made to one of the below blog posts to either clarify or correct information, per the policy of City Times. A detailed correction is shared below the post.

Doors opened at Golden Hall at 7 p.m. for the public to view incoming results.

Golden Hall is an opportunity for local San Diego members to come out and support their candidates, as well as voice concerns about the city.

The City Times staff and Newscene staff will be reporting live updates throughout the night with the latest election results.

8:24:25 – the first results in San Diego were starting to appear at Golden Hall.

Biblical Voters Encouraging Christian’s to vote for their beliefs

As Super Tuesday starts to heat up, so do the parties. The Biblical Voter group has become a platform for reintroducing Christian values in the political system and encourages their members to vote with Christian beliefs in mind.

“I found out I was forgiven and I became a new creation,” said event coordinator Robin Ellis. “Biblical voters are about pushing Christians of all age groups to voice their beliefs.” 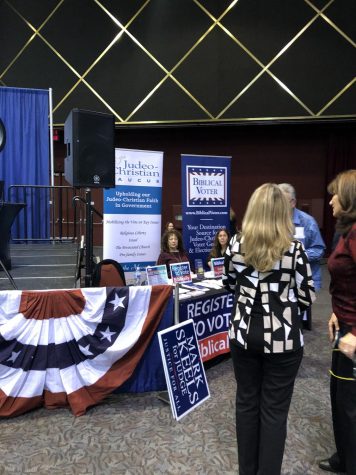 Ellis, now sober for 25 years, said she found her way back to her church after a difficult time in her life. Her hope is to help others with struggles similar to hers, and encourage them to vote in this election.

The Biblical Voters, partnering with the Judeo-Christian Caucus, are conservative groups hoping to re-elect President Donald trump in the upcoming presidential election.

Some current issues concerning the Biblical Voters include the Israel conflict, abortion rights, and religious liverty. You can visit their website to view their complete Christian voting guide at biblical voter.com.

“I can’t even take (my grandchildren) to our beach,” said Partlow.

STOP THE POOP is filled with concerned citizens who are actively searching for solutions to save the TJ River Valley, the City of Imperial Beach as well as the oceans and waterways from the illegal dumping of Mexican-based raw sewage and toxic waste.

“This particular day I couldn’t even get two blocks to the beach without getting overwhelmed from the smell of raw sewage and ammonia from urine … the air was too toxic … I decided right then and there on February 28, 2017 it’s time to go into action,” said Partlow.

The group wants to raise awareness and apply pressure to the city.

If anyone wants to know more you can find STOP THE POOP – Let’s unite & end Mexican Sewage Dumping into US waters on facebook.

Carmelita Larrabaster says no to Prop 13

Carmelista Larrabaster, who is running for member of the state assembly of the 79th, says voting no on prop 13 is the way to do it.

“They’re creating the problem, there is no real problem,” said Larrabaster.

Prop 13 seeks to give $15 billion to public schools, $2 billion of those would go to California community colleges. If passed, the money would be used for construction and infrastructure. The bonds would be repaid during a period of 35 years by the state general fund.

Larrabaster says she understands the consequences of that, and that “schools are getting enough.”

“There are other ways to do it. I am a mother and so when we have a crisis or when we have to spend some more money we have to tighten up in some of the luxuries, that is how to do it. Prioritize,” said Larrabaster.

Results in the 79th Assembly District will be available later tonight.

The new voting system implemented by San Diego County and introduced during the state primary election debuted without incident according to San Diego County Registrar of Voters Micheal Vu.

The changes are meant to modernize a system that had not seen significant improvements in 16 years while possibly leading to faster vote counting, though the voting itself still happens primarily on paper.

“The only thing that was introduced was our new ballot marking system and there are no issues there,” Vu said.

Vu expects to receive all of the ballots by midnight with results being announced between hours after.

Republican Congressman Juan Hidalgo JR. is on his third campaign trail for congress. As a retired Sergeant Major USMC, Hildalgo hopes to represent the 51st district.

Hildalgo is basing his platform on three major issues that the 51st district is currently facing, including lowering the unemployment rate, public safety and improving the education system.

Hidalgo talks about how both republicans and democrats are getting behind his efforts to try and end the sewage dump coming into the U.S. from Mexico.

“I’ve got an expert that claims the cleanup will take 5-7 years… when I’m in office jobs and education and public safety are my priorities.” said Hidalgo.

“No ones representing the 51st district. They have a guy holding the seat but he’s not doing anything. If I learned anything over my 31 years in the Marine Corps, it’s you get out there and the people that work for you, you really work for them.” said Hidalgo.

Campaign volunteer Marcela Villalpanbo has been working tirelessly the past few weeks to boost Hildalgo’s campaign alongside her mother, Vivianna.

“As tiring as it is, we have been having a lot of fun, but we are struggling.” said Villalpanbo.

To find out more, you can visit Juan Hidalgos’ website at HidalgoforCongress.com.

District 1 includes the Scripps Institute, the Birch Aquarium, and UCSD.

“Sam is a small business owner, he advocates for the homeless, climate change, he’s just a very genuine guy. He is running to give back to his community, and everything he wants to do, he has a plan” said Haifa Chayah, a political science major at UCSD.

This is Nejabat’s first run for office in San Diego, bringing his experience in real estate and a degree in law from the Berkeley School of Law.

Sean Elo currently serves as a member of the SDCCD Board of Trustees. Two of the current board members are running for re-election.

“I think that both of my colleges that I serve with are really good members, I endorse both of them, I think they are doing a pretty good work. I am also deeply concern about some of what I know about their competitors, in terms of their associations,” Said Elo, indicating that he understood that the views of diversity of their competitors do not reflect does of the student body.

Nevertheless, Elo campaign is for City Council, saying that if he elected today during the primaries, and then again in November, he will be stepping down from the SDCCD board.

Elo is running a 100% volunteer campaign that includes high school students and students from SDSU and San Diego City College.

Elo later said he doesn’t let the campaign to distract him from his duties of trustee, “I’m elected to serve there and that’s a priority. Before we campaign, comes my responsibility as a trustee. You all deserve that,” Elo said.

“I’m running for city council because I really do think that the best way to do an impact for all students, and for the professors and staff as well. I think the city should be doing more to support students,” said Elo.

“It was just all hands on deck and 14-hour days and just doing everything you possibly could to catch up with the others,” said Sherman.

Sherman is the only Republican in the mayoral race.

Sherman looks forward to the incoming results throughout the week.

Reverend Shane Harris is a former leader of San Diego’s chapter of Al Sharpton’s National Action Network. Harris has been a part of efforts to address community relations with San Diego law enforcement.

Harris recently won a seat on the San Diego County Child and Family Strengthening Advisory board, where he brings his own personal experience as a former foster youth to advise the county on foster care issues. Harris sits on the board with two county supervisors, Nathan Fletcher and Greg Cox.

Harris is president of an organization called the People’s Alliance for Justice founded in 2018.

Correction: The above post has been corrected. It originally said Harris was a leader of the San Diego chapter of Al Sharpton’s National Action Network. He is no longer a part of the group. Harris’ role in the People’s Alliance for Justice was clarified to say he is president of the nonprofit. Harris is a former foster youth, and the story has been changed to clarify that. The City Times regrets the errors.

Some families bring their children to Golden Hall

Witnessing the election is important for future voters to learn the importance of being an active participating citizen, especially with the upcoming 2020 election for president on November.

“My wife works for the elections, the reason why we bring our kids (is) to see the end results (and show them) what voting means. said Matthew Miller. “For the people that care about it, it’s a big deal here at Golden Hall. It’s just an experience (you witness) once.”

Ashley Miller added, “I work with politics with marketing. The reason I brought my boys here (is because) they are in high school and they don’t teach (politics) in school.”

Official results will be announced throughout the week.

Nathan Fletcher on the primaries results

Supervisor Nathan Fletcher stopped by Golden Hall alongside wife Lorena Gonzales and talked about the night’s elections, saying it’s been a great night of democrats in San Diego County.

“A particular interest to me, the board of supervisors is clearly turning democrat and turning blue, in one district you have two democrats advancing at the runoff, and then the Republican incumbent has fewer votes than the Democratic challenger which is not where you wanna be if you are an incumbent. So I think that as a democrat it is a great night in San Diego,” Fletcher said.

“I would like to see our board really reject the Trump agenda,” he said referring to the board of supervisors, “It’s time for us to get serious about tackling climate change, about continuing to invest more in mental health and drug treatment services, and issues around the homelessness. And then it’s time for us to take a stand on the side of immigrants and refugees and really move our county in a more progressive direction to help the most in need.” Fletcher has been a member of the San Diego County of Supervisors since 2019.

In October 2019 Lorena Gonzales announced her endorsement for Elizabeth Warren during a rally at San Diego.

However, tonight’s announcements have not been in favor of Warren, but Gonzales says she will stand by Warren “until she is no longer in the race.”

Jesus Lopez from Newscene contributed to this report.