8 books to (spring) break away from quarantine

As quarantine continues for City College students, reading can be a great escape 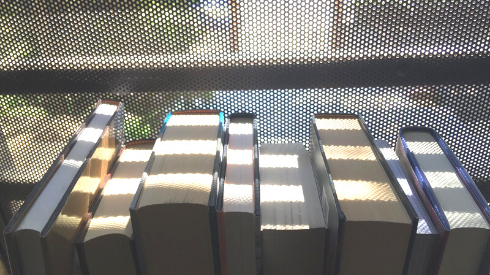 With quarantine keeping City College students inside, here is a list of books to help pass the time. Photo by Melisa Cabello-Cuahutle/City Times

If you’re like me, the last thing you want to hear right now is anything related to “pandemic” or “quarantine.” But if you are also like me, you suddenly have a lot of free time this spring break.

And what better way to forget the outside world than by reading about things that have nothing to do with you.

Whether you want to forget the outside world completely, or you want just a little understanding, here are eight books to read during quarantine.

And there’s no need to leave your house or buy them online. If you have a library card, you can download the apps for your local branch and access many of the titles for free on your phone.

The City of San Diego has this list available, while the county has a list here. Also consider third-party sites like Overdrive (which also has an app) to access libraries beyond our community.
“An Absolute Remarkable Thing” by Hank Green
April May was a fresh-out-of-college, struggling graphic designer in New York City when she decided to post a video of a giant sculpture that appeared out of nowhere at night. She named the sculpture Carl.

What she didn’t know was that other Carls would soon also appear around the world, and no one knew why or who was behind them. Almost instantly, April’s video went viral and she became the face of the Carl-mystery.

The sequel, “A Beautifully Foolish Endeavor,” will be published in July 2020.

“The Miseducation of Cameron Post” by Emily M. Danforth
Well, at least you know the reason you’re locked in is to keep you healthy.

It was a hot, summer night in Montana when Cameron Post kissed a girl for the first time. She did not know it yet, but that same night, her parents were killed in a car accident. It was then when Cameron’s overly conservative aunt moved in with her.

For the next few years, Cameron tries to explore her sexuality fully aware that not everybody in her town thinks it’s okay for girls to kiss other girls. That is, of course, until her aunt finds out and sends her to a center to “fix” her.

Because one book only is not enough, a movie starring Chloë Grace Moretz is now available.

“A Very Large Expanse of Sea” by Tahereh Mafi
When you think about a Muslim girl, what do you think? You probably won’t think of a 16-year-old who loves fashion and break dancing, but that is exactly who Shirin is.

A high school student a year after 9/11 in America, Shirin faces Islamophobia daily, from rude stares to physical violence.

The only thing anyone seems to care about is her hijab That is, until she meets Ocean James.

From a New York Times bestselling author, “A Very Large Expense of Sea” is based on the author’s own experience growing up as a Muslim in America.

The fiction book details everything about the band, from its creation to its wild tours, to its sudden breakup. And of course, it details a famous collaboration with Daisy Jones, who turns the band’s music from popular to iconic.

If you like music and fame stories, this book is just for you. A TV show adaptation of the book is currently being co-produced by Reese Witherspoon starring Sam Claflin and Riley Keough, who is Elvis Presley’s granddaughter.

“Between Shades of Gray” by Ruta Sepetys
Lina was a student and an artist in Lithuania when Stalin’s regime occupied much of Eastern Europe. Lina’s father was a professor and like many scholars of his time, he was classified as a criminal and traitor. He and his family were sentenced to a life of labor in Siberia.

Based on true events, the book talks about resilience and unity.

Also published as “Ashes in the Snow,” the movie adaptation is now available.

“The Book Thief” by Markus Zusak
“The Book Thief” tells the story of Liesel, a German girl who was sent to a foster home after her parents were accused of being communists. As the war progresses, Liesel learns how to read by stealing books.

As Liesel starts to learn about words, she also learns about friendship, particularly with a neighbor with lemon-color hair, her accordion-playing foster father, and the Jew who is being hidden in their basement.

The film adaptation was released in 2013.

“The Guernsey Literary and Potato Peel Pie Society” by Mary Ann Shaffer and Annie Barrows
This book is a love story for books.

Now that World War II is over, Juliet Ashton is ready to write about something she loves. The opportunity presents itself when she starts exchanging letters with a stranger from a formerly German-occupied island.

The stranger, Dawsey Adams, tells Juliet how the residents of the island formed a book club,  using literature as an escape during the occupation. With all the hostility and struggles around the residents, stories are what kept them sane.

“Shatter Me” by Tahereh Mafi
If you think this quarantine has lasted long enough, then you probably don’t want to be in Juliette’s shoes, who hasn’t been able to touch anyone in exactly 264 days.

Juliette was locked away because her touch is fatal, and no one really knows why. But after being imprisoned for months, the government realizes they might have a use for her after all.

If fantasy and dystopia are your genres, you might be interested in this book. The final book in a series of six will be released on March 31.

Read any of these books? Let us know on social media @SDCityTimes or leave a comment below.