New bonds would continue to fund an existing institute 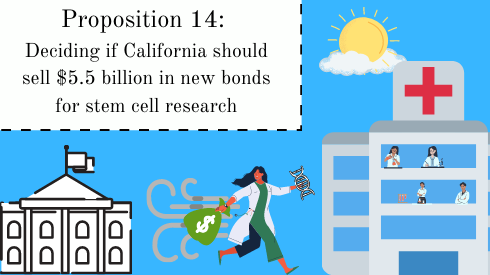 California is voting on selling $5.5 billion in new bonds for research and development of stem cell research. Graphic by Brandon Manus

The gist
California is voting on selling $5.5 billion in new bonds to continue funding grants for research and development of stem cell treatments.

A yes vote on this measure means Proposition 14 would issue $5.5 billion in funding to an existing state stem cell research institute. The California Institute for Regenerative Medicine, based in Oakland, was created in a 2004 voter-approved measure to support scientific research toward finding treatments and a deeper understanding of diseases such as Alzheimer’s, heart disease, cancer and strokes. Voters originally approved $3 billion, but that money is now on its last legs. As of June 2020, only $30 million remained.

A no vote on this measure means the state could not sell $5.5 billion in bonds primarily for stem cell research and the development of new medical treatments in California. Some opponents say the institute hasn’t produced the kind of life-saving treatments that were promised when it was created. There is also no longer a ban on federal funding for stem cell research, which led to the institute’s creation in 2004. The institute is funded with public money, but does not have any legislative oversight or address potential conflicts of interest. Some opponents have also criticized the requirement that $1.5 billion be cordoned off for brain and central nervous system diseases, saying it hampers the institute’s flexibility to respond to changing needs.
What the media is saying?
Vote No on Prop. 14, a costly, unnecessary bond measure, The Sun (article)
Stem-cell agency doesn’t merit additional funding, The Mercury News (article)
Why Prop. 14 is unaffordable, unnecessary, fatally flawed and unsupportable, The San Diego Union-Tribune (article)
What Proposition 14 Tells Us About California, The New York Times (article)
More borrowing for stem cell research, Los Angeles Times (article)

• Marcy Darnovsky, executive director of the Center for Genetics and Society

For more information about Prop 14, go to Ballotpedia.org.