The events were covered in this week’s edition of Newscene, the award-winning student-produced weekly newscast 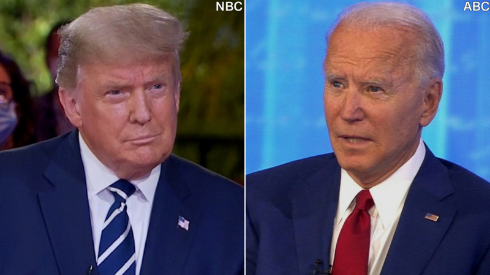 In lieu of an in-person debate, the town halls aired during the same time slot, with Biden on ABC  and Trump on NBC, CNBC and MSNBC.

The events were covered in this week’s edition of Newscene, the award-winning student-produced weekly newscast.

NBC was reprimanded for forcing spectators to choose one or the other to watch live. The Trump event was originally planned for the night of the second debate and was canceled after Trump objected to a virtual debate.

Trump complained about a lack of questioning about Biden’s son Hunter and the Ukranian gas company Burisma.

Biden criticized questions about adding seats to the Supreme Court if he were elected, a practice called court-packing.

“If I answer the question directly, then all the focus will be on, ‘what’s Biden going to do if he wins,’ instead of if it is appropriate what is going on now,” Biden said in his town hall. “This is a thing the President loves to do, which is always take our eye off the ball.”

Biden drew about half a million more viewers than Trump across three networks.

She refused to give specific responses about the upcoming case on the Affordable Care Act or the topic of abortion.

Senator Lindsey Graham made it clear at the start that all Democrats would vote no while all Republicans would vote yes, regardless of what came out of these hearings.

The Senate will vote on the nomination this Wednesday.

Census conclusion: The Census ended on Thursday following a ruling by the U.S. Supreme Court.

The Supreme Court sided with Trump to overturn a lower court ruling that mandated the Census to continue until the end of the month.

NFL cancels ProBowl game: The NFL has decided to cancel the 2021 Pro Bowl game due to the inherent risk of players, coaches and team personnel contracting COVID-19.

The rosters will still be voted on by fans, players and coaches and revealed in December.

This is the first time that the game has been cancelled since 1949.