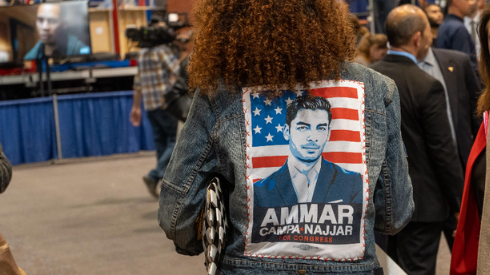 A visitor to Golden Hall for the 2020 California Primary in March wore a jacket featuring an images of Ammar Campa-Najjar. File photo

The Democratic Congressional candidate remains optimistic this morning, posting on Facebook and Twitter “#CA50 has been fired up and ready to go since 2017! Today, we finish what we started together.”

#CA50 has been fired up 🔥 and ready to go since 2017! Today, we finish what we started together. #TogetherweCan #VoteAmmar 🇺🇸 pic.twitter.com/xHKzjBC0Ce

Campa-Najjar plans to go live on Facebook tonight at 8:05 p.m. after the polls close. 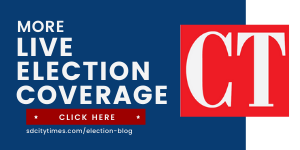 The 50th District has been Republican for years.

The House seat is currently vacant. Former Rep. Duncan Hunter pleaded guilty and resigned in January after being charged with campaign funds, fraud and conspiracy.

According to that poll, 51% said they were supporting republican candidate Issa and 40% said Campa-Najjar, while 9% were still undecided.