Jacobs celebrates her lead during a virtual election night party 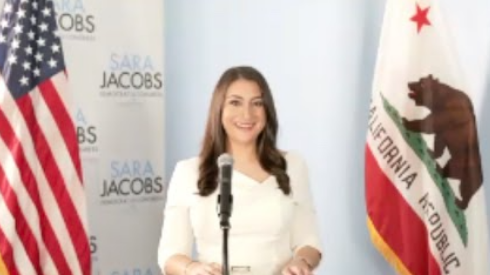 As votes here in San Diego continue being counted, the results of the election do not seem to be what we all hoped for. While we did not win this one, I will never give up the fight for equality and justice and a sustainable planet.

Early election results released by the San Diego County Registrar of Voters showed Democrat Jacobs leading Democrat Gómez by nearly 20 points in the race with 59% of votes as of 9:31 p.m., which did not change significantly at 10:26 p.m.

Jacobs delivered her election night victory speech at 9:40 p.m., her campaign said, on Zoom. She congratulated her opponent and thanked incumbent Susan Davis during her victory speech, telling her supporters “we need you.”

The winner of the 53rd congressional race will replace 10-term incumbent Davis, a Democrat who is retiring.