Gonzalez authored Assembly Bill 5, which would be overturned if Prop 22 passes 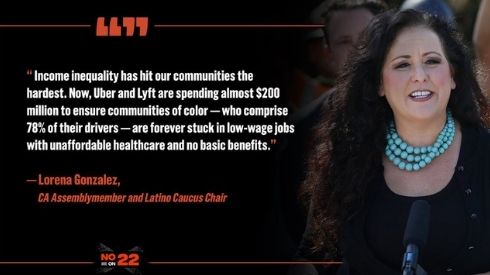 Lorena Gonzalez took to Twitter on Election Day to show her support for #NoOn22 in a push for equal rights for app-based drivers.

We have 200 volunteers text-banking against Prop 22! We are going to hit half a million voters for just today! If you’ve volunteered through hustle, you can join us tomorrow at 10am! #NoOnProp22

Lorena Gonzalez expressed her concern for the “illegal classification” of millions of Uber, Lyft and other delivery service giants around the state, claiming Proposition 22 would take away sick days, equal pay and healthcare from current employees.

App-based independent contractors would also have to work a certain number of hours in order to receive healthcare benefits that they already currently have.

Learn more about Prop 22 in the City Times’ Voters Guide.