Latino support for Trump increased significantly in states like Florida 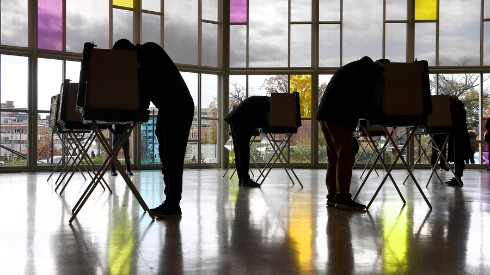 (CNN) — President Donald Trump picked up more Latino voters in several key battleground states than he won in 2016, according to preliminary results of a nationwide CNN exit poll.

The President captured almost half of the group in Florida, up from 35% in 2016. Former Vice President Joe Biden earned just over half of the Latino vote in the state, compared to 62% who supported Democratic nominee Hillary Clinton four years ago.

However, in Arizona, Latino voters favored Biden by nearly a 2 to 1 margin, with Trump barely making a dent. Clinton also won the Latino vote there handily in 2016.

But more voters under age 30 have flocked to the former vice president in several important Midwestern states and in Arizona.

Among young voters in Arizona, Biden was the candidate of choice by more than 2 to 1.

Trump lost support among this age group in these four states compared with 2016.

White voters with college degrees also shifted slightly toward Biden. He captured a double-digit lead with this group in Michigan, Arizona and Pennsylvania, though Clinton did not win this group in any of these states in 2016.

Just over half of senior voters in Florida selected Trump, compared to 57% in 2016, according to the early exit poll. And his share among independent voters slipped from 47% in 2016 to just over 2 in 5 this year.

Meanwhile, slightly more than half of independent voters in Arizona supported the former vice president, a significant increase from 2016, when Trump won the group by 47% to 44%. This year, around 2 in 5 independents supported the President.

Seniors in Arizona also threw their support to Biden, who captured slightly more than half their vote. In 2016, Trump won this demographic.

CNN’s exit polls this year incorporate in-person interviews at early voting locations and telephone interviews to target by-mail voters. Those surveys are in addition to the in-person interviews with voters on Tuesday. In every state where exit poll results are available on election night, there will be a combined result to reflect a complete picture of voters across the country.

Early exit polls show college-educated voters comprised a little less than half of the 2020 electorate, up slightly from 4 in 10 voters who had a college degree in 2016. White voters made up roughly 2 in 3 voters in the 2020 electorate, which is down slightly from 71% in the 2016 electorate. Women comprised just more than half of the electorate this year, according to those early exit polls, similar to 2016.
Economy is the main concern
The economy was top of mind for voters as they cast ballots for president, according to preliminary results of a nationwide CNN exit poll.

And while they were fairly evenly split on whether the country’s economy is doing well, more than half said the coronavirus pandemic has caused them financial hardship. Still, more say they are better off today than four years ago (around 4 in 10) than say they are worse off today (2 in 10).

The US suffered its steepest loss of jobs in April as states shuttered non-essential businesses and told residents to stay at home to try to contain the Covid-19 outbreak. While employers have rehired millions of Americans, the country is still down 10.7 million jobs since February. The 7.9% unemployment rate is the highest its been ahead of a presidential election since the government started tracking the monthly rate in 1948.

About one-third of voters called the economy their most critical issue, while roughly 1 in 5 citing racial inequality and about 1 in 6 named the coronavirus pandemic as most important to their vote. Roughly 1 in 10 each cited health care policy and crime and violence as their top issue.

Even though more cited the economy than coronavirus as their most important issue in choosing a candidate, a narrow majority say that the nation’s priority now should be containing the coronavirus over rebuilding the economy.

That finding comes as most voters feel the nation’s efforts to contain the virus are going badly. With coronavirus cases rising in many states, nearly 7 in 10 voters say they view wearing a face mask as a public health responsibility more than as a personal choice.

Among voters for the former vice president, more than one-third said racial inequality was their most important issue, beating out all others.

About half of voters say the nation’s economy is in poor shape, though more say they are better off today than four years ago (around 4 in 10) than say they are worse off today (2 in 10). Still, a majority say they are experiencing financial hardship as a result of the coronavirus pandemic.
Containing the coronavirus
Overall, most voters feel the nation’s efforts to contain the virus are going badly. But that sentiment varies widely by which candidates people are supporting.

More than 4 in 5 Biden voters say that efforts to contain the virus are going badly, while only 1 in 10 Trump supporters feel that way.

As of Tuesday afternoon, the US reported 9.3 million cases of the virus and more than 232,000 people have died, according to data from Johns Hopkins University. It is forecast to take tens of thousands more lives in coming months.
Loyal to their candidates
The majority of Trump and Biden supporters said they cast ballots more in support of their candidate than against his opponent, though Trump’s base was even more loyal to him. More than 4 in 5 people said they voted for the President, while just under two-thirds of Biden’s voters said the same.

The top quality voters were looking for in a president was a strong leader. One third said so, while just under a quarter were wanting someone with good judgment and just over one-fifth thought a candidate who “cares about people like me” was most important. Fewer than one-fifth were looking for someone who can unite the country.

When it comes to the issues, nearly three-quarters of voters said a candidate’s position on the issues was most important, while less than quarter named the candidate’s personal qualities.

More than half of voters said the Supreme Court should keep Obamacare as it is. Justices will hear oral arguments on a case that seeks to overturn the landmark health reform law next Tuesday.

More than 3 in 5 voters said that Supreme Court appointees were an important factor in their vote — Trump named three justices in his first term, shifting the court to the right.

Two-thirds of voters said that climate change is a serious problem.
Half of voters confident their ballots will be counted accurately
Voters largely found the experience of casting their ballots to be an easy one, though there is a wide gap between the share of White voters who say it was very easy (roughly three-quarters) and the share of Black voters who feel the same way (about half). About half overall say they are very confident that votes in their states will be accurately cast and counted, about the same as four years ago.

The survey suggests a high level of new voter participation. About 1 in 8 say 2020 is the first year they have ever voted, about on par with the share saying so in 2008.

CNN Exit Polls are a combination of in-person interviews with Election Day voters and telephone polls measuring the views of absentee by-mail and early voters, and were conducted by Edison Research on behalf of the National Election Pool. In-person interviews on Election Day were conducted at a random sample of 115 polling locations nationwide among 7,774 Election Day voters. The results also include 4,919 interviews with early and absentee voters conducted by phone. Results for the full sample have a margin of error of plus or minus 2 percentage points; it is larger for subgroups.

This story is breaking and will be updated.