No on Proposition 16 is in the lead 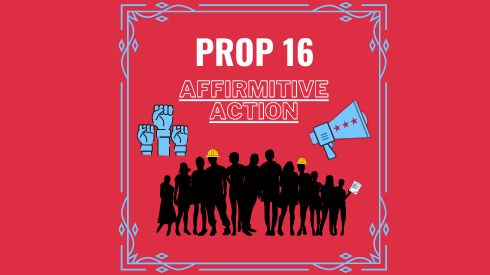 Early results for Proposition 16 show it is headed for defeat. Canva image

Prop. 16 would have repealed Proposition 209, which prohibited the state from discriminating against or granting preferential treatment to persons on the basis of race, sex, color, ethnicity, or national origin in public employment, public education and public contracting.

Supporters believed that Prop. 16 would assist the diversity in public employment, education and contracting decisions.

“The ongoing pandemic, as well as recent tragedies of police violence, is forcing Californians to acknowledge the deep-seated inequality and far-reaching institutional failures that show that your race and gender still matter,” said Assemblymember Shirley Weber, according to Ballotpedia.

Opponents of Prop. 16 believed it would create a greater divide and be a step backward for equality.

“Is it right to give someone a job just because they are white, or black or green or yellow? Or just because they are male?” said Assemblymember Steven S. Choi, according to Ballotpedia. “Repealing Proposition 209, enacted by voters 24 years ago, is to repeal the prohibition of judgment based on race, sex, color, ethnicity and national origin. We are talking about legalizing racism and sexism.”