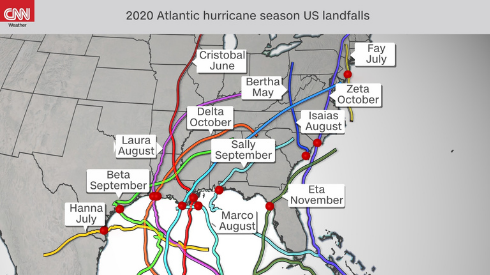 2020 was a record-breaking year for Atlantic hurricanes, a signal that sea surface temperatures are rising. CNN Weather photo

2020 was a record-breaking year for Atlantic hurricanes, a signal that sea surface temperatures are rising.

The Atlantic hurricane season runs from June 1 to November 30 each year. The 2020 season wrapped up with a total of 30 named storms, with 13 becoming hurricanes.

Twelve of those hit the U.S. shores, which was also a record number. The previous record was nine, set back in 1916.

The Saffir-Simpson hurricane wind scale defines a hurricane as a “tropical cyclone with maximum sustained winds of 74 mph or higher.”

“This year, we are under the phenomenon of La Niña, which allows for less wind-shear to take place across the Atlantic basin,” senior meteorologist Marvin Gomez told Newscene’s Jesus Lopez in an interview over Zoom. “Specifically, across the Caribbean, we noticed hurricanes got closer toward Central America and many more moved throughout the region due to a lack of those cutting winds that would rip apart any formation of cyclones.”

European and American forecast models suggest an active hurricane season for 2021 as well.

Newscene is the award-winning student-produced weekly newscast. To enroll in the spring, visit the class schedule on sdcity.edu and look for RTVF 145.